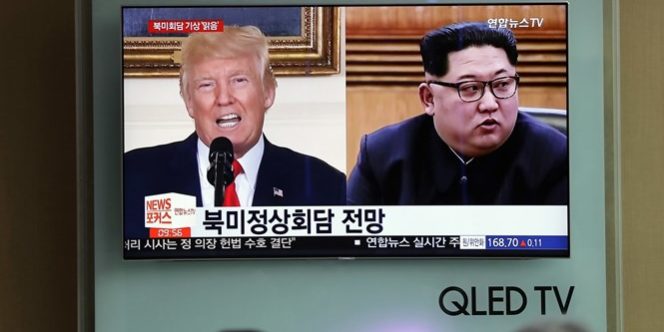 On Thursday morning President Trump announced he cancelled the upcoming Singapore summit with North Korean Dictator Kim Jong Un. He sent a letter directly to Un, saying “based on the tremendous anger open hostility displayed in your most recent statement, I feel it is inappropriate, at this time, to have this long-planned meeting.”

At the White House, President Trump further explained his decision and said the U.S. military is standing by if necessary.

“If and when Kim Jong Un chooses to engage in constructive dialogue and actions, I am waiting. In the meantime, our very strong sanctions, by far the strongest sanctions ever imposed, and maximum pressure campaign will continue as it has been continuing,” Trump said. According to a senior White House official, here’s the timeline of what went down in recent months and days leading up to the president’s decision:

On March 8, 2018 a South Korean delegation traveled to the White House to request President Trump meet with North Korea’s Kim Jong Un. During that time period and in the weeks following, North Korea agreed to denuclearization and understood joint military exercises between the United States and South Korea would continue. President Trump accepted the invitation to meet. “The North side clearly affirmed its commitment to the denuclearization of the Korean Peninsula and said it would have no reason to possess nuclear weapons should the safety of its regime be guaranteed and military threats against North Korea removed,” South Korean National Security Adviser Chung Eui-yong said from the White House at the time.

Last week the North Koreans issued a major objection to legal military exercises between the U.S. and South Korea. They also refused to denuclearize in a complete and verifiable way. This marked two broken agreements/promises. In recent days, the North Koreans went dark on White House officials already in Singapore working out the logistics of the summit.

“The summit was halted because we couldn’t get them [North Korea] to pick up the phone. There was radio silence,” a senior official said. Seretary of State Mike Pompeo backed this up during testimony on Capitol Hill Thursday morning. Yesterday, North Korea issued a statement threatening the United States with nuclear war and called Vice President Mike Pence a “dummy.”

“Whether the US will meet us at a meeting room or encounter us at nuclear-to-nuclear showdown is entirely dependent upon the decision and behavior of the United States,” North Korean Vice Minister Choe Son Hui said. The North Koreans again threatening the U.S. with nuclear war was a final straw and showed a “profound lack of good faith.”

After “sleeping on it,” President Trump gathered his national security team together Thursday morning, which included National Security Advisor John Bolton and Vice President Mike Pence, and made the final decision to write Kim Jong Un the lettercancelling the summit. He dictated every word himself.

President Trump wants to see the North Korea problem resolved in order to keep the American people safe.  “President Trump is willing to pursue diplomacy as far as it can possibly be pursued,” a senior White House official said Thursday afternoon.

North Korea has not issued a response to the cancellation.