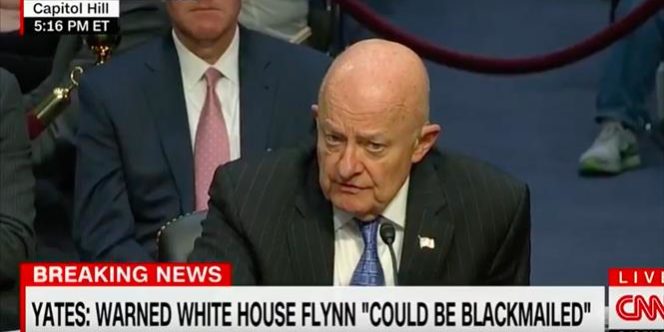 President Trump blasted the “Criminal Deep State” early Wednesday, suggesting things have “turned around” in “SPYGATE,” following revelations of a reported FBI informant snooping on the Trump campaign. “Look how things have turned around on the Criminal Deep State. They go after Phony Collusion with Russia, a made up Scam, and end up getting caught in a major SPY scandal the likes of which this country may never have seen before! What goes around, comes around!” Trump tweeted Wednesday morning.

Minutes later, the president added: “SPYGATE could be one of the biggest political scandals in history!”

The president’s tweets come after reports that an FBI informant communicated with at least three members of his campaign—Foreign policy adviser George Papadopoulos, Trump aide Carter Page and campaign adviser Sam Clovis. Trump then went on to quote former Director of National Intelligence James Clapper, who discussed the issue of an FBI informant Tuesday during ABC’s “The View.”

“’Trump should be happy that the FBI was SPYING on his campaign’ No, James Clapper, I am not happy. Spying on a campaign would be illegal, and a scandal to boot!” Trump tweeted.

The Justice Department instructed its inspector general to investigate any alleged “impropriety or political motivation” in the FBI’s investigation into Russian interference and potential collusion with Trump campaign associates during the 2016 presidential election, following demands from Trump.

“I hereby demand, and will do so officially tomorrow, that the Department of Justice look into whether or not the FBI/DOJ infiltrated or surveilled the Trump Campaign for Political Purposes—and if any such demands or requests were made by people within the Obama Administration!” the president tweeted Sunday.

Earlier this week, the president met with Deputy Attorney General Rod Rosenstein and FBI Director Christopher Wray in the Oval Office, discussing the expansion of Inspector General Michael Horowitz’s investigation to include “irregularities” with the FBI or DOJ’s “tactics concerning the Trump campaign.” White House Press Secretary Sarah Sanders also said that during the meeting, the three agreed that White House Chief of Staff John Kelly would “immediately set up a meeting with the FBI, DOJ, and DNI together with congressional leaders to review highly classified and other information they have requested.” That meeting is slated for Thursday, and will be with House Intelligence Chairman Devin Nunes, House Oversight Committee Chairman Trey Gowdy, Wray, and Director of National Intelligence Dan Coats. Kelly will not attend the meeting — his role was simply to coordinate.

“If they had spies in my campaign…for political purposes, that would be unprecedented,” Trump said Tuesday during a meeting in the Oval Office with South Korean President Moon Jae-in, calling it a “disgrace.”

“I hope there weren’t,” Trump said. “[If there were], it would make every political event ever before look like small potatoes.”