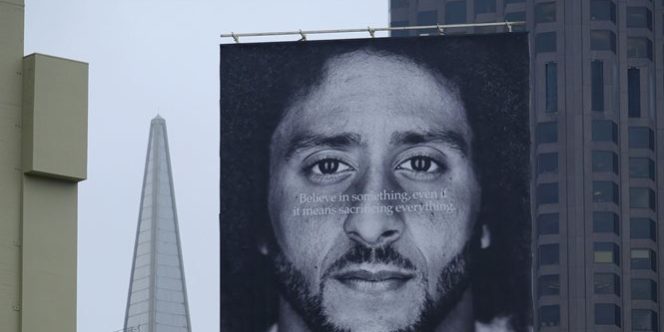 Former National Football League player Colin Kaepernick is back in the spotlight. The ex-San Francisco 49ers QB is now the face of Nike’s ‘Just Do It’ campaign. It’s controversial. That was the intent, to give the middle finger to hard-working, American patriots. It was a shot across the bow of Trump’s America, rural America, conservatives, and those who support our troops, those who have died defending the flag, and law enforcement. That’s pretty much everyone. The ad deals with sacrifice, which has some veterans not taking too kindly to the impression this whole campaign is taking; this also comes at a time where the brand lost billions in market share and suffered a huge double-digit drop in favorability. There were no gains among key demographics with bringing anti-cop Kaepernick into the fold.

It’s infuriating. At the same time, it’s a free country. And while Nike lost billions, they won’t be hurt. We can still hurl our anger towards them though, but one veteran decided to launch a counteroffensive against the social justice warrior ethos that’s beginning to infest American business.

Army Captain (ret.) Tyler Merritt is the CEO of Nine Line Apparel. And they’ve already sold tens of thousands of gear from their ‘Just Stand’ line. One post featured Mark “Oz” Geist, a former U.S. Marine who was part of the Benghazi compound security team, was featured wearing their t-shirt, while carrying an AR-15. He’s an American hero. Period. Four Americans died during that tragic terror attack, which included Ambassador Chris Stevens. It remains a source of controversy from the days of the Obama administration six years ago, which swore that al-Qaeda was on the run.

Nike took a stand. “This is ours,” said Merritt in a statement. “They will never understand what it’s like to lose a friend overseas, carry him back home with an American flag draped over his casket, and hand that flag over to his wife and children. Taking a knee during the National Anthem is a sign of disrespect to all those throughout our country’s history who have paid the ultimate sacrifice to secure the blessings of freedom.” Intrepid reporter Salena Zito, who has logged thousands of miles and hours of interviews venturing into Trump land, covered this company back in July. Zito, being a native of Western Pennsylvania, was one of the first to see the makings of the Trump coalition back in 2012. At the time, it was nameless, faceless, and could have broken for either of the two political parties. GOP latched on, while the Democrats chose to denigrate these people as deplorable. Guess which side won in 2016?

The company — named Nineline after the military code word for getting wounded soldiers off the battlefield — has since flourished, going from Merritt’s garage to a business run out of a 60,000-square-foot building, producing a complete range of patriotic apparel that will employ over 200 people by the end of this year.

“We don’t shy away from our patriotism,” Merritt said. “It is at the heart of how we began a business.”

While many major American companies, like Walmart, Dick’s Sporting Goods and Delta Air Lines, appear to have taken an anti-Second Amendment stance by dropping discounts for NRA members, and the NFL continues to struggle with the issue of players bowing out of the national anthem, Nineline is unadulterated. The company enthusiastically supports standing for the flag — and the right to bear arms.

Shirts with slogans like “All Rifles Matter”; “Stomp My Flag, I’ll Stomp Your Ass”; “I stand with the American Flag”; and “Faith, Family, Friends, Flag and Firearms” are flying off the racks. Merritt says their sales peak during holidays like the Fourth of July and also when gun ownership comes under attack in the news.

In filling this niche, Merritt is reaping a big revenue. In 2016, just three years after he launched, the company posted an astounding $9.8 million in sales and was named one of the fastest growing companies in America by Inc. magazine. Merritt predicts they will hit over $20 million in sales by the end of this year.

It may not have the net worth or cash reserves as Nike, but there are many ways to make a living here in the U.S. And a company dedicated to timeless principles is refreshing, offering conservatives unwilling to support Nike an outlet to sport some good ole’ fashioned American gear. These veterans had out backs in uniform. Now, they can serve us again at home, creating new businesses that cater to a more rustic and patriotic demographic, honoring real heroes, remembering their fallen comrades, and remind folks why taking a knee was a fool’s errand—and totally unnecessary to make the points the pro-kneelers wanted to make. The thing is, and I’ve said this before, police brutality and race relations are discussions we should have, but you torch any chance of it being productive if you trash the anthem and our flag. No matter what—the public will see this as you spitting on veterans and those still serving; we’re still at war in Afghanistan, by the way. It’s unseemly. I don’t think they should be suspended or fired, but don’t whine when scores of Americans set you the hell on fire on social media.