Liz Peek: Angry Obama still doesn’t get it as he hits the campaign trail 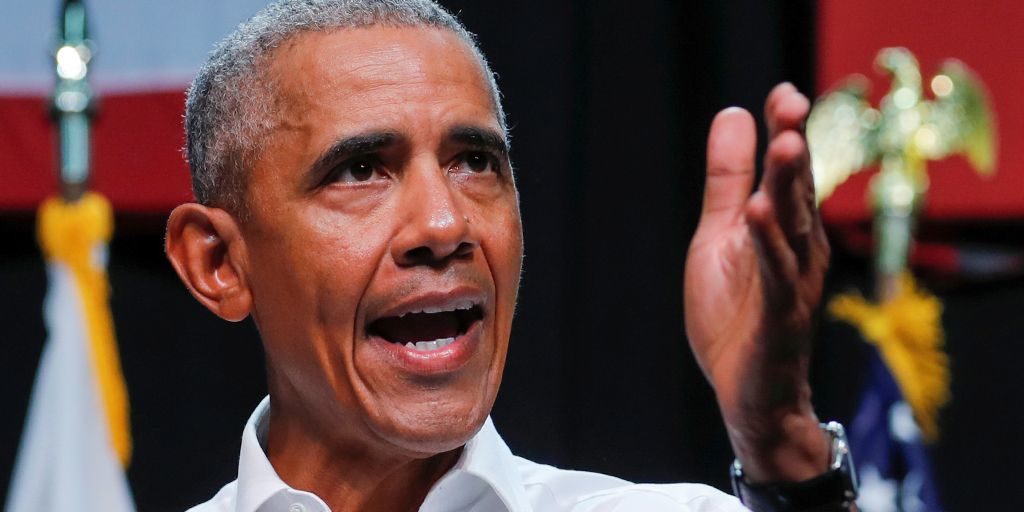 In a fiery campaign speech at the University of Illinois, the former president suggested that Donald Trump was elected in 2016 by the “powerful and the privileged.” He also railed at voters for failing to show up, and for permitting such a damaging “threat to our democracy.”

But here’s the truth: it wasn’t the powerful elites that voted for Donald Trump in Michigan and Ohio. It was blue collar workers who felt they had been overlooked by Obama and by Democrats. Who were offended by the headlong rush into identity politics, and by policies that protected everything but their jobs and their livelihoods.

It was voters in Ohio and Pennsylvania, who had seen local industries move overseas, and it was voters in Michigan, who were aggrieved that Hillary Clinton took their votes for granted. The election in 2016 was not unique.  Americans also rebuked the president in 2010, when Democrats lost 63 seats in the House – one of the worst pummelings in modern times — and again in 2012, when Republicans took over the Senate. Voters also pushed back by electing an unprecedented number of GOP candidates in state legislatures and governors’ mansions while Obama occupied the White House. Were those elections the work of lobbyists and other nefarious interests? No, those elections were a wake-up call that Obama and his party failed to heed. They were so busy slicing and dicing the population into groups that could be won over by targeted policies, they forgot to worry about the country overall.

President Obama is angry that President Trump is getting credit for the booming economy; he figures he got the ball rolling. He is correct that his administration managed to stave off a depression but for years, even as voters listed jobs and the economy as their number one concerns, Obama’s focus was elsewhere.

Nothing better highlights his misguided ambitions and priorities than the Paris Climate accord. Obama embraced that toothless celebration of global cooperation even though it would hobble the U.S. economy and its powerhouse energy industries while enabling the continued expansion of China, by far the world’s biggest carbon emitter. Similarly, Obama’s enthusiasm for the Trans Pacific Partnership, a trade agreement judged by the World Bank as not beneficial to the U.S., reflected his appetite for legacy and indifference to putting America first, as President Trump might say.

Under President Trump, the economic expansion, already long in the tooth, has accelerated. There is no denying that his election ushered in an immediate surge in business optimism, which has kicked off a steady rise in capital investment, key to productivity and wage gains. Democrats charge that the corporate tax cuts have benefited only the wealthy, but they know better. Consumer spending growth is being driven not only by surging optimism but also by rising incomes. Though the average hourly wage has gone up only slightly faster than inflation, households have also benefited from lower taxes, the opportunity to trade up to a better job and from the huge number of bonuses handed out by companies in celebration of lower corporate taxes.

The most recent jobs report provides a useful snapshot of what is happening. Wages rose 2.9 percent year-over-year, the fastest pace in 9 years. Economists suggest that the annualized rate going forward might reach 3 percent -3.5 percent, the best in years. As impressive as the top-line number is, the rise in manufacturing jobs over the past year is even better news. President Obama mocked President Trump’s promise to bring back manufacturing jobs during the 2016 campaign, asking “What magic wand do you have?”

But it didn’t take magic; it took business managers knowing the government was working with them and not against them, that they were not likely to be shut down by some ill-advised regulation, and that our tax regime would no longer put them at a disadvantage.  Through July, we had added 327,000 manufacturing jobs over the past year, the most in a 12-month period since 1995.  Those are “good-paying” jobs, as Hillary Clinton might have said.

The surging economy is alarming to Democrats eager to retake the House of Representatives in November. To counter the good economic news, liberals have resorted to scare tactics, promising, for instance, that elevating Judge Brett Kavanaugh to the Supreme Court will mean the end of Roe v. Wade, greater access to guns, dirtier air and increasing racism.

In his speech, Obama warns that Republicans are “tapping into America’s dark history of racial and ethnic and religious division.” But then he has the temerity to rail about the “politics of fear and resentment;” one wonders whose politics he is talking about. He complains that “demagogues promise simple fixes to complex problems,” but it is his party that wants the government to provide free health care to everybody and to guarantee everyone a job. Those are simple fixes, but they are also unworkable and costly enough to bankrupt the nation. Above all else, President Obama is angry. President Trump has systematically chipped away at his legacy, taking us out of the TPP, the Paris Climate Accord and the insufficient Iran nuclear deal and removing misguided regulations like the Clean Power Act and the guidance on how colleges should deal with campus sexual assault.

Trump isn’t doing this out of spite, but rather because these were bad policies. For the most part, they were also unpopular policies. That’s why voters rose up to protest in 2010, 2012 and 2016. Americans may have let Obama down in those elections, as he suggests, but they didn’t let the country down. Obama says the upcoming election is the most important in his lifetime; he may be right. Democrats are keen to undo the progress we have made over the past year, and they could. Let us hope voters won’t give them the chance.