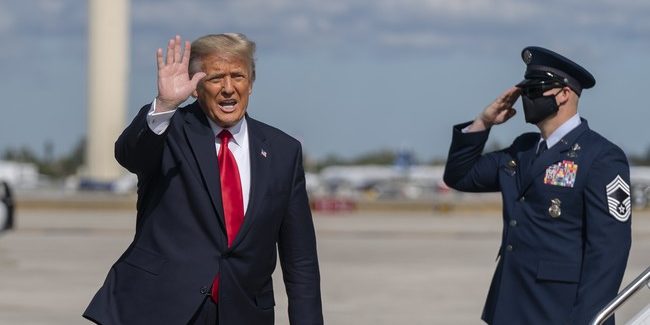 If you were hoping to see any of President Donald Trump ever again on Facebook and Instagram, you’re going to be sorely disappointed. The social media platforms removed an interview the former president gave with his daughter-in-law, Lara Trump.

The reason given in an email from a Facebook employee, read in part that “content… in the voice of President Trump is not currently allowed on our platforms” which “includ[es] new posts with President Trump speaking.” This so-called “guidance applies to all campaign accounts and Pages, including Team Trump, other campaign messaging vehicles on our platforms, and former surrogates.” In other words, it couldn’t be more all-encompassing.

Fortunately, the interview from March 30 was available on other platforms.

The former president shared in the 18-minute interview that he’s been doing “great” in Florida. In addition, to the media hypocrisy in covering himself versus his successor, Trump also touched upon a sort of buyer’s remorse many voters may have, or should, now that President Biden is in office:

I think people get it. You know, very importantly, the things that he said, whether we debated, or he just made statements, all of those things, were not what he’s doing. This is more liberal, more radical than Bernie Sanders ever had in mind. Bernie could not be happier. But this is something Bernie would have never suggested, what’s happening. He never talked about what he’s doing to destroy energy, and the second amendment now is gonna be next. They’re gonna destroy the second amendment. All of the things that they’re doing are–things raise taxes at a level, the biggest tax increase in history–those were not things that were discussed at all during the election.

There was also a conversation on big tech, including censorship, specifically when Twitter’s Jack Dorsey admitted it was “a mistake” to censor reporting from the New York Post on the Hunter Biden story. Trump said the censoring of Hunter Biden during the campaign, “to me that was really the beginning…” in that the public does not have the opportunity to decide for themselves what to believe. He called it “this new phase” where “you have something and they won’t put it out… it’s a very interesting time.”

Trump mentioned his press releases which he called “more elegant” and is “getting the word out.” He also raised further questions that he’s going to be available once more on a future social media platform, as previously hinted by Jason Miller.

The former president “I think there’s room for something, and I bring a lot of people with me, but we’ll see,” and promised to put “a statement or two out, or three, or five” out. Trump did emphasize, however, that he’s happy with those press releases. Noteworthy is how Trump offered “I think social media has become so corrupt, that people aren’t believing it anymore… it’s become a lot like the media itself. We don’t have freedom of the press anymore. We have a corrupt press with a point of view, and all they want to do is sell the point of view.” He went on to mention those points of view have to do with defunding the police and border crisis.

The interview closed with Lara pointing out “people all want to know… do we have hope that there’s a possibility to see Donald Trump run again in 2024.” Without hesitation, Trump told his daughter-in-law that “you do have hope, that I can tell you, you do have hope.” He emphasized, “now we have to help our country.”

We miss you, Mr. Trump. Here’s hoping for more interviews to come, though it will be no thanks to Facebook and Instagram.