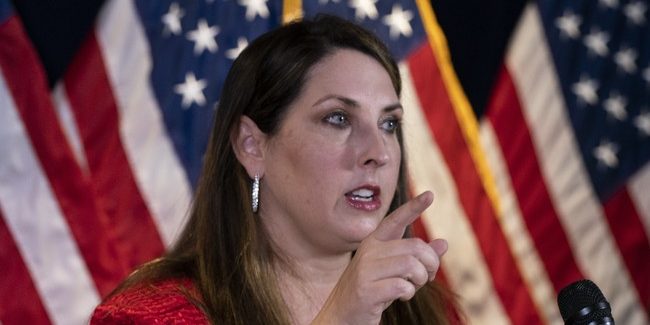 Georgia and Iowa recently unveiled a series of election reforms. Georgia Senate Bill 202, signed into law by Gov. Brian Kemp, is “a comprehensive election reform bill that creates a more transparent, efficient, and effective election process,” according to the RNC and NRSC. It requires providing reasonable voter ID requirements when applying for and returning absentee ballots and allowing observation of the tabulation, scanning, and duplication of ballots.

But Democrats are outraged by the provisions, essentially calling them racist, and have filed lawsuits in both Georgia and Iowa. RNC Chairwoman Ronna McDaniel and NRSC Chairman Senator Rick Scott released the following statement, revealing that they’ve intervened in those lawsuits.

“The Democrats have grossly mischaracterized the provisions and impact of Georgia’s and Iowa’s recent election reforms,” they said. “The RNC, NRSC, and our partner committees look forward to fighting back against the Democrat lies and their lawyers’ incendiary and outlandish claims. Unfortunately, but unsurprisingly, many in the mainstream media have bought the Democrat narrative hook, line, and sinker in these dishonest attacks. But we are confident the courts will see through this partisan rhetoric and uphold both of the laws that reasonably balance access and integrity.”

“The contrast couldn’t be clearer. Voters are demanding secure elections, certainty in results, and state-led and governed processes. Republicans in states like Georgia and Iowa are doing the serious work of making meaningful election reforms that increase confidence, reduce the risk of fraud, and hold incompetent and rogue local election officials to account. But Democrats are crusading to put Washington in charge of elections, even if it means cancelling out the voters’ voices in Iowa’s 2nd Congressional District in the name of partisan gains. We know the American people are with us. They support common-sense reforms to protect the integrity of our elections and we look forward to winning that argument in a court of law.”

Relatedly, Democrats have been trying to overturn the results of Iowa’s 2nd Congressional District race, which Republican Mariannette Miller-Meeks rightly won. She won by only by six votes, but her victory was certified by a bipartisan canvassing board. Her Democratic challenger Rita Hart finally conceded on Wednesday.

Elated, GOP Leader Kevin McCarthy stuck it to House Speaker Pelosi: “Rita Hart and Nancy Pelosi finally heard what many Iowans told me today: Mariannette Miller-Meeks is the duly-elected Congresswoman serving Iowa’s Second Congressional District. Pelosi’s attempted power grab failed. And Iowans and America are better off because of it,” he reportedly said.