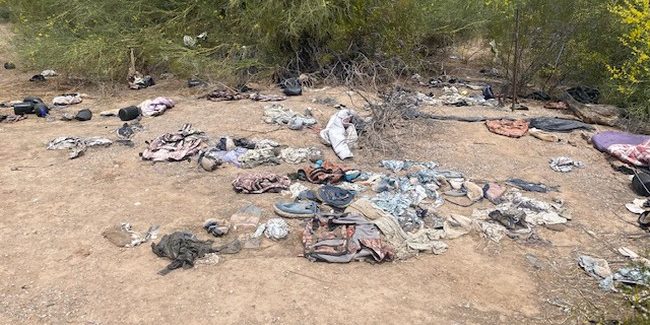 In Pinal County near the town of Stanfield, which is 70 miles north of the U.S. southern border with Mexico, piles of trash and clothing left behind by smugglers can be found just steps away from working farms. Smugglers and the people they bring illegally into the U.S. wear multiple layers of clothing, with the top layer being some kind of camouflage. Once they get through the Tohono O’odham Nation, where border security is severely lacking, smugglers reach a drop point. There, they instruct those they’ve brought into the country illegally to leave the top layer of their clothing — revealing civilian clothing that makes it easier to blend into normal society — and any trash they still have with them. This includes hats, backpacks, pants, jackets, belts, shirts and “carpet shoes,” which are worn over regular shoes and don’t leave trackable footprints. They also drop black water bottles, which they specifically use to evade detection because they do not reflect the sun.

“The biggest concerns, it’s not just one, it’s a bunch. The environmental concerns because of the damage that they’re doing because you have hundreds, if not thousands of people coming through the desert, dumping their trash as you saw, dumping all of their trash in our desert prior to them getting taken to their next location,” Pinal County Chief Deputy Matthew Thomas told Townhall during a visit to the area. “You have the humanitarian piece because these are human beings that are coming up and the cartels don’t care about them as human beings, they see them as a commodity. So they’re being raped, they’re being extorted, they’re being robbed, they’re being beaten, they’re being kidnapped. All of those things are going on.”

This type of dumping not only presents serious environmental concerns, but breeds violence. According to Thomas, when large groups of people are being smuggled to Phoenix, it is inevitably dangerous as armed rip crews return to the region.

“What we know historically happens when we see this volume of bodies is it attracts the robbery/rip crews because it’s easy pickings for them and they’ll come back,” Thomas said. “We have rip crews or robbery crews that will wait for those bodies to get up here closer to the hub of Phoenix and they’ll rob that load of bodies and they don’t care who they hurt in doing it and then they extort those same people, take them up. And then we have just the normal drug that the cartel is associated with.”

When the violence returns, the 911 calls don’t go to federal law enforcement like Border Patrol of Immigration and Customs Enforcement, they go straight to the Pinal County Sheriff’s Department.

“The problem, especially for local law enforcement, when they [rip crews] shoot and kill somebody, when they rob somebody, beat somebody, stab somebody, we are the ones who get the 911 call. We are the people responding to that call. That is our investigation to now deal with so whether it’s a homicide or an assault or ag [agriculture] assault,” Thomas said. “Then, if you have somebody live, are they even going to be there for the prosecution because they are here illegally. They’ll disappear, they’ll just assimilate into whatever area they go to and you’ll never find them again, which makes it tough for prosecution.”

But it isn’t just illegal immigrants who get caught up in the crime, U.S. citizens become innocent bystanders and suffer the consequences in a number of ways.  “There’s also the problem of U.S. citizens who are getting caught in the middle of this. They’re getting hit head on on the roadway by a load of illlegals, 20-30 deep in a vehicle that’s overloaded, crashing into someone and killing them on the roadway,” said Sergeant Brian Messing, head of the Pinal County Anti-Smuggling Unit. “The person that’s walking in the desert and ends up staggering into a rip crew and gets into a gun battle or shot because of them. There’s a problem of citizens who are innocent who have no concern about the border problems, that all the sudden become a victim of it.”

Allowing the situation to go unchecked by the federal government will only make things worse and lax border policies from the Biden administration have set back several efforts to curtail smugglers.

“On I-8 in our county where a guy traveling I-8 going from point A to point B just happened to pull over in the smuggling corridor to go pee, at night and two guys jump out with guns to take his car, he breaks away from them, gets in his car, they shoot at him and hit the car, he calls 911 and we go out there, but like we told you, they’re gone because it’s such a vast area,” Thomas added. “But just some normal dude pulling over on the road to go pee after a long trip and he’s on a desolate highway and dudes with guns pop out to take his ride.”