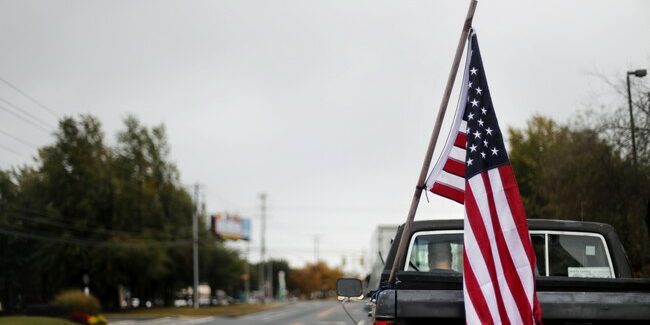 We already know that the US electorate is lopsidedly dissatisfied by President Biden’s leadership and the stewardship of the Democrats’ majorities.  That data has been clear for months, which is why voters are expected to make changes in November.  Beyond electoral politics, a new survey from the Wall Street Journal portrays an alienated, pessimistic country.  Americans are rattled and upset.  Biden was swept into office on the promise of normalcy, moderation, and healing.  He has delivered none of those things.  The country wants no part of the current status quo, which cannot become a ‘new normal.’  The president and his team have governed to the left, enamored with the notion of becoming an FDR-style, transformative president.  Expectations have been managed very poorly, and bad results have followed.  And far from living up to the promise of his actual mandate from voters, which he correctly identified in his victory speech, Biden himself has far too often stoked embers of division and polarization from the Oval Office.

It’s a bad look.  Reports are that he’s bewildered and “seething” over his political misfortune, casting himself the victim of unfair public scorn over issues beyond his control.  He’s an unjustly maligned bystander, in his own mind.  But he’s earned every bit of unpopularity, and then some.  And if White House aides think he’s dyspeptic and agitated, wait until they see how the American people are feeling:

Americans are deeply pessimistic about the U.S. economy and view the nation as sharply divided over its most important values, according to a new Wall Street Journal-NORC Poll. The findings are from a Journal survey conducted with NORC at the University of Chicago, a nonpartisan research organization that measures social attitudes. The survey found Americans in a sour mood and registering some of the highest levels of economic dissatisfaction in years. The pessimism extended beyond the current economy to include doubts about the nation’s political system, its role as a global leader and its ability to help most people achieve the American dream. Some 83% of respondents described the state of the economy as poor or not so good. More than one-third, or 35%, said they aren’t satisfied at all with their financial situation. That was the highest level of dissatisfaction since NORC began asking the question every few years starting in 1972 as part of the General Social Survey…

…More broadly, the survey reveals a despondent view of national unity and partisan splits over cultural issues, suggesting that a connective tissue of pessimism underlies Americans’ economic and social attitudes. Some 86% of respondents said Americans are greatly divided when it comes to the most important values, and over half said they expect those divisions to worsen five years from now, up from just a third of respondents who were asked the question last year.  About six in 10 respondents said they were pessimistic about the ability for most people to achieve the American dream…The Journal-NORC poll showed that about a third of respondents were optimistic that people of different races or religions could come together and solve the country’s problems. Just 13% of respondents said they were optimistic that was true for Americans who hold different political views.

The expectation of deepening divisions may become a self-fulfilling prophesy.  And I’m not sure how to sugarcoat any of this:

Biden and the Democrats deserve a lot of blame for a lot of things.  They’re culpable.  But some of this spiral goes far beyond mere partisan differences.  The rot is deeper than any one party or figure, and a shared confidence in our country and our system has been eroding for years.  I’m not sure there’s a sunny, serious, likable, steadying, confidence-renewing Reaganesque character waiting to waltz onto the national scene and turn things around — but competent leadership is sorely needed.  I’m skeptical that any politician can truly be ‘unifying’ in this era, but we can do better than this, and we can achieve outcomes far better than this.  Can’t we?  In her most recent, scathing column, former Reagan speechwriter Peggy Noonan puts her finger on how many Americans are feeling:

I close with a thought tugging around my brain. I think I am seeing a broad and general decline in professionalism in America, a deterioration of our pride in concepts like rigor and excellence. Jan. 6 comes and law enforcement agencies are weak and unprepared and the U.S. Capitol falls to a small army of mooks. Afghanistan and the departure that was really a collapse, all traceable to the incompetence of diplomatic and military leadership. It’s like everyone’s forgotten the mission. I’m not saying, “Oh, America was once so wonderful and now it’s not.” I’m saying we are losing old habits of discipline and pride in expertise—of peerlessness. There was a kind of American gleam. If the world called on us—in business, the arts, the military, diplomacy, science—they knew they were going to get help. The grown-ups had arrived, with their deep competence. America now feels more like people who took the Expedited Three Month Training Course and got the security badge and went to work and formed an affinity group to advocate for change. A people who love to talk, endlessly, about sensitivity, yet aren’t sensitive enough to save the children bleeding out on the other side of the door. I fear that as a people we’re becoming not only increasingly unimpressive but increasingly unlovable. My God, I’ve never seen a country so in need of a hero.

In the aforementioned ‘seething’ Politico story detailing Biden’s predicament, the name ‘Carter’ comes up several times.  That’s not an accident, and those echoes aren’t only about inflation and weakness abroad: