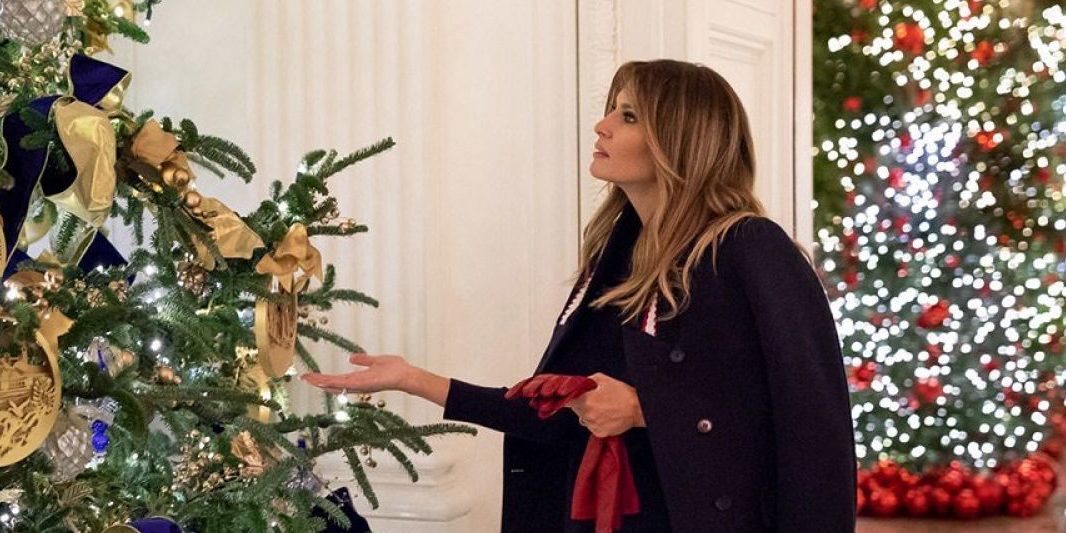 First lady Melania Trump brushed off criticism of her latest White House Christmas decorations and invited everyone to check them out in person during an appearance at Liberty University on Wednesday. “It’s the 21st century and everybody has different tastes, I think they look fantastic,” the first lady said at a town hall discussion on America’s opioid crisis. “I hope everybody will come over and visit it,” she said as the crowd erupted in applause. “In real life, they look even more beautiful. You’re all very welcome to visit the White House.”

A variety of mainstream media outlets bashed Melania’s holiday décor when they were revealed on Monday. Many watchdogs came to her defense, noting that negative feedback was simply an example of hypocrisy from reporters who aren’t fans of her husband, President Trump.

Melania told the Liberty University crowd that the media likes to focus on “unimportant stuff” such as holiday decorations, but her goal is to shine a light on important issues that she can impact as first lady — such as the opioid crisis and preparing children to become successful adults.

The official White House Christmas tree is seen in the Blue Room during the 2018 Christmas Press Preview at the White House.

The politically polarizing decorations include more than 20,000 feet of lights, 14,000 ornaments, 12,000 bows, wreaths made from pencils, an enormous gingerbread house, 40 topiary trees and a lot of red, which the first lady’s office called “a symbol of valor and bravery.” The Washington Post continued to mock the decorations two days after they were unveiled with an opinion piece referring to Melania’s “nightmare forest” that dusted off many of the derogatory comparisons made by Twitter trolls earlier in the week.

“Last year the trees were a hideous, ghastly white. It was always winter and never Christmas,” columnist Alexandra Petri wrote. “This year everything is red. It is perfectly natural that the trees are red. The trees are red (the Internet says) as a handmaid’s cloak. Do not think of blood. Keep walking.” Not all members of the media have expressed disdain for Melania’s Christmas decoration and TheWrap’s Jon Levine took to Twitter to defend her style. “I think the White House Christmas displays look amazing and that history will look far more kindly on Melania Trump’s style choices than her many critics today,” Levine wrote.

Melania Trump brushed off criticism of her holiday décor, saying “everybody has different tastes.” The Daily Caller’s Benny Johnson attended a press preview of the decorations on Tuesday night and came away impressed. “It wasn’t just nice — it was beyond my wildest expectations,” Johnson wrote. “The decorations dazzle as one walks from room to room. The old mansion comes alive.  Even the much-maligned ‘Red Christmas trees of death’ would melt the stone heart of the most bitter critic.” Johnson ended his review by echoing the first lady’s request: “To the harshest critics of Melania, I implore you: Go see the decorations for yourself.”

Mayorkas Ripped for Claiming His Border Plan Is ‘Working’
September 22, 2021

‘Where Is She?’ MSNBC Host Rips Kamala Harris For Being a Miserable Failure on the Border
September 22, 2021