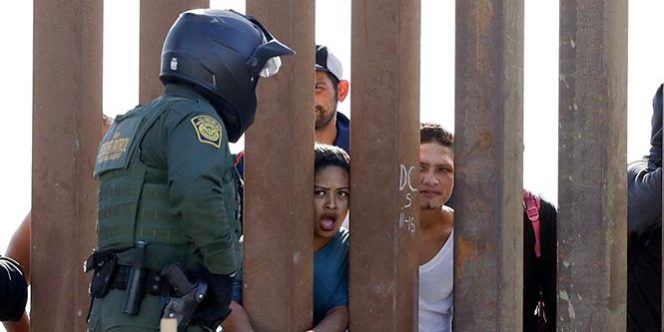 For weeks, the liberal media, the Democratic Party, and pro-open borders activists have tried to disseminate the narrative that there is no border crisis, that there’s no invasion, and that the Trump administration’s immigration enforcement agenda is grounded in racism. They don’t want a wall, though they’re totally fine with the Green New Deal, which is nothing more than economic death for the U.S. That’s the killer that economic nightmare is projected to cost over $90 trillion, but a $5.7 billion border wall initiative is too much. This is political theater, but sometimes the facts just blow up the spot.

There are two publications that said there was a growing crisis at the border when everyone else wanted to keep their heads in the sand: The Washington Post and The New York Times. Now, NBC News is reporting that February apprehension numbers reached its highest levels in 12 years:

The number of undocumented immigrants crossing the southern border last month was the highest total for February in 12 years, according to statistics released by Customs and Border Protection on Tuesday.

In 28 days, and in the same month President Donald Trump declared a national emergency in order to build a border wall, 76,103 immigrants without the needed documentation to enter the U.S. either presented themselves at legal ports of entry or were apprehended by Border Patrol between ports of entry.

It is the highest total for February since 2007, DHS officials said at a press conference Tuesday. It is also the highest single-month total since Trump was elected in November 2016. Crossings hit 66,842 in October 2016, just before Trump’s election.

Over at The Post, reporter Nick Miroff has more, though he noted on Twitter that the recent apprehensions numbers are bonkers. They literally go off the chart. If you average how many illegals are arrested at the border from the numbers we’ve seen thus far, it’s not unrealistic to project Border Patrol and other immigration enforcement could nab in the neighborhood of 765,000 illegal aliens this year. There were only 521,090 last year. Miroff noted the crisis at the border; specifically, the spikes in family migration, while adding that neither party is in a mood to hash out a deal to at least do something to address this growing issue:

The number of people taken into custody along the Mexico border jumped an additional 31 percent last month as an unprecedented mass migration of families from Central America pushes unauthorized crossings to the highest levels in a decade, according to U.S. Customs and Border Protection figures released Tuesday.

Last month, the shortest of the year, was the busiest February at the border since 2007, officials said, with authorities detaining 76,103 migrants, up from 58,207 in January. The percentage of migrants who arrived as part of a family group also reached a new peak, with 40,325 parents and children taken into custody, a 67 percent leap from the previous month.

There is a problem at the border. Trump is trying to fix it. Democrats won’t let him. And the media either ignores it or lies about it.  On the latter, it’s a day that ends in “y.”