‘No One F***s With a Biden’: POTUS’ Trip to Florida Goes As Expected 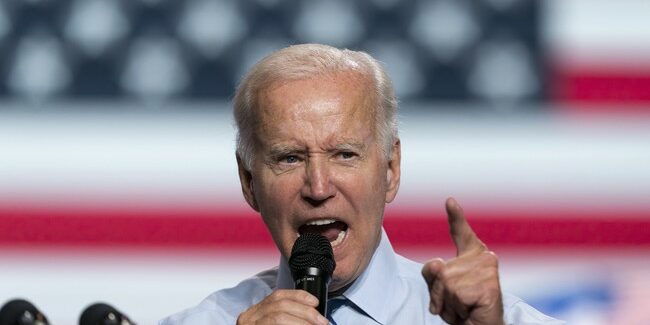 During his visit to Florida’s Gulf Coast on Wednesday to survey damage done by Hurricane Ian, President Biden had some normal things — as well as some not-so-normal things — to say to reporters and first responders gathered in Fort Myers.

Bucking the mainstream media and many Democrats who’ve sought to blame Governor Ron DeSantis — due to the (R) that appears next to his name — for the carnage caused by Ian, President Biden congratulated DeSantis for his administration’s preparation and response to the storm. “What the governor’s done is pretty remarkable,” Biden said amid destroyed buildings and boats thrashed around by Ian’s wind and storm surge.

But, as usual, it didn’t take long for the president to get off-script and start talking about “global warming” and preaching — while in Florida — about how “the Colorado River looks more like a stream” and “there’s a lot going on.” Biden then used the destruction and death in Florida from Hurricane Ian to allege the storm and other recent natural phenomena “finally ended” the “discussion about whether or not there’s climate change, and we should do something about it.”

Biden, of course, did not explain how U.S. climate legislation would do anything to stop the thunderstorms from rolling off the west coast of Africa and developing into hurricanes. But then there was a question for Biden about what state or federal officials could do to prevent future loss of life to storms like Hurricane Ian, and again Biden rambled on about how “the biggest thing governors have done” is they have “recognized there’s a thing called global warming.”

Apparently, according to Biden, paying lip service to “global warming” is the “biggest” thing state leaders can do to protect the lives of their citizens from natural disasters…and maybe that explains why the Biden administration has failed to do anything to reduce inflation, avoid leaving Americans behind Taliban lines in Afghanistan, or address rising crime.

Before leaving Fort Myers to make his way back to the White House, Biden was caught in fine form on a hot mic while reporters were being corralled back onto a press van. “No one f***s with a Biden,” the president seemingly says while glad-handing.

Even in that profane quip, Biden is wrong. Earlier on Wednesday, OPEC embarrassed Biden by rejecting his pleas to maintain production levels and instead doubled its originally discussed plan to reduce 1M barrels per day to a total of 2M fewer barrels released each day. There are countless other examples as well, such as SCOTUS ruling his vaccine mandate unconstitutional or overturning Roe v. Wade despite Biden’s objections. Then there’s his own party on Capitol Hill that failed to pass key pieces of his legislative agenda. And, of course, there was his own bicycle that, well, put him on the pavement.