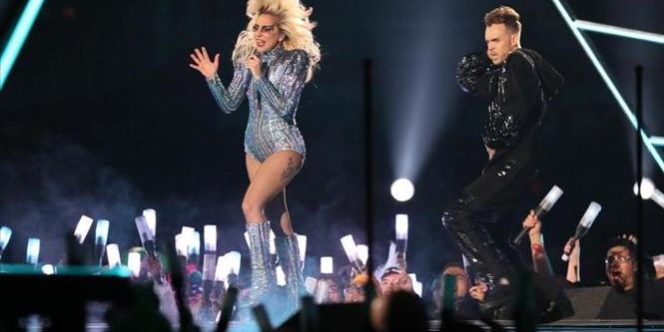 Lady Gaga performed at the Super Bowl’s halftime show, and by all accounts, she absolutely slayed the performance. The 13-minute show had everything: a sparkly football, drones making an American flag, a keytar, acrobatics, and some incredible singing and dancing. What it did not have, however, was an overt political message. For most normal humans, this was fine, and welcomed after last year’s halftime show–but some killjoys out there were upset about this (or, they insisted it was political after all).

Give it a rest. Lady Gaga performed a medley of her biggest hits–which include the inclusivity anthem “Born This Way.” While “This Land Is Your Land” certainly gets aggressive in the later verses, she purposefully excluded those from the performance. (A statement by omission, if you will.) The “theme” of the show was coming together as a nation, and if that’s somehow a political statement, I want off this ride.

Nobody is tuning into the Super Bowl looking for advice on how to think politically. Sports are supposed to be a pleasant distraction from the real world’s problems–a sort of escapism. Gaga gave one heck of a performance, and she should be lauded for that. She shouldn’t be derided for not taking a shot at President Donald Trump. Her job was to entertain, and she did. That’s all we’ve asked of her.