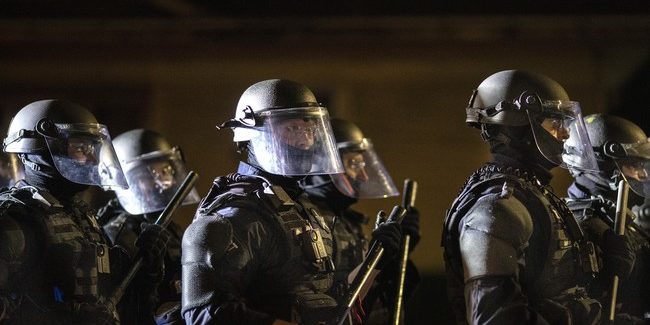 The Portland Police Bureau’s highly-trained rapid response team no longer exists after all 50 members resigned from their voluntary positions follow the indictment of one officer for a misdemeanor assault during last summer’s rioting. They have now returned to their daily assignments, the PPB said, describing the RRT members as being “trained in advanced skills related to crowd management and crowd control including crowd psychology and behavior, team formations and movements, the use of enhanced personal protective equipment, use of force, de-escalation and arrests.”

The Portland Police Association said the indicted officer “has been caught in the crossfire of agenda-driven city leaders and a politicized criminal justice system.”

A planned demonstration was organized on August 18, 2020, outside of the Multnomah Building in SE Portland. Online posts called for people to come with guns and weapons that night. Under the cover of darkness, a group of 200 demonstrators, many equipped with tactical helmets, faces covered, and armed with a variety of weapons, sparked a night of violence. Multiple dumpsters were set on fire, buildings were defaced, and windows were broken.

As the event escalated it was declared a riot; community members and police officers were at risk of serious injury and someone from the crowd launched a Molotov cocktail into the Multnomah Building, setting it ablaze.

After nearly 75 consecutive nights of violence, destruction, and mayhem, a small group of RRT officers—including Officer Budworth—were again tasked with dealing with the riot. Per PPB Command Staff orders, RRT officers cleared the rioters from the area to allow the Fire Bureau to extinguish the blaze.

But the rioters were not satisfied. A short time later, the same group of rioters re-amassed and began to march back toward the Multnomah Building. RRT was again deployed to disperse the crowd and prevent any further violence and criminal activity. A confrontation then ensued. As RRT officers worked to clear the rioting crowd, Officer Budworth was forcefully knocked to the ground. The crowd grew even more aggressive, prompting other RRT officers to deploy pepper spray and less lethal munitions to try and break up the riot.

During the encounter, an officer began to take one of the rioters into custody. Other rioters interfered with the arrest. RRT officers, including Officer Budworth, used their Police Bureau-issued batons to try and stop the crowd’s criminal activity. Per his training and in response to the active aggression of a rioter interfering with a lawful arrest, Officer Budworth used baton pushes to move a rioter, now known to be Teri Jacobs, out of the area. As Officer Budworth cleared Ms. Jacobs from the area to stop her criminal activity, Ms. Jacobs fell to the ground. Reasonably believing that she was getting back up to re-engage in her unlawful activities, Officer Budworth employed one last baton push to try and keep her on the ground, which accidentally struck Ms. Jacobs in the head. The location of Officer Budworth’s last baton push was accidental, not criminal. He faced a violent and chaotic, rapidly evolving situation, and he used the lowest level of baton force—a push; not a strike or a jab—to remove Ms. Jacobs from the area.

Ignoring the reality of the violent nature of the crowd and Ms. Jacob’s criminal activity, the Multnomah County District Attorney’s Office has now charged Officer Budworth with a crime for his permissible use of force. Officer Budworth did exactly as he was trained. Don’t just take our word for it; PPB’s own experts reviewed his actions and found them reasonable, permissible, and in accordance with his training.

The Association reminded readers that the officer is innocent until proven guilty, adding that they are confident he’ll be “exonerated of all charges.”