President Trump Has Announced His Nominee for the Supreme Court 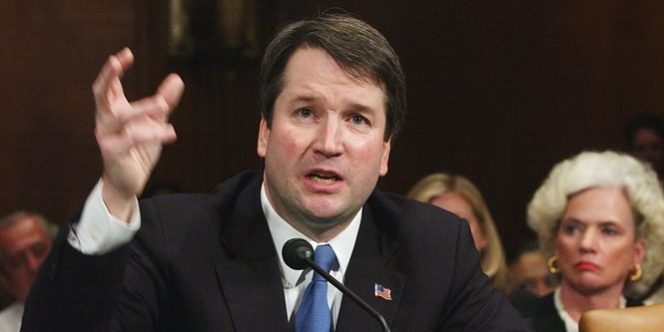 Speaking from the East Room of the White House Monday night, President Trump announced Brett Kavanaugh as his choice to replace retiring Supreme Court Justice Anthony Kennedy. “Other than matters of war and peace, this is the most important decision a president can make,” Trump said, speaking directly to the American people in a prime time address. “The rule of law is our proud, American heritage.”

“In keeping with President Reagan’s legacy, I do not ask about a nominee’s personal opinions. What matters is not a judge’s political views, but whether they can set aside those views to do what the law and the Constitution require,” he continued. Kavanaugh, 53-years-old, sits on the United States Circuit Court of Appeals for the District of Columbia. He graduated from Yale Law School and served as a clerk for Justice Kennedy in 1993. He served in the Bush administration from 2001 to 2006 and was at the White House on September 11.

“The framers established that the constitution is designed to secure the blessings of liberty. Justice Kennedy dedicated his career to secure liberty. I am deeply honored to fill his seat on the Supreme Court,” Kavanaugh said. “I revere the Constitution.” Kavanaugh credited his mother, who sat in the audience, as his inspiration for pursuing a career in law. He has two daughters and coaches their basketball teams. He serves meals to the homeless at his church and has run the Boston Marathon twice. “I thank God everyday for my family,” Kavanaugh said.

During his remarks, President Trump touted his previous Supreme Court nomination of Neil Gorsuch, who replaced the late-Justice Antonin Scalia last year. Scalia’s wife, Maureen, was in the audience. Gorsuch and Kavanaugh clerked together. Kavanaugh will begin meeting with members of the Senate tomorrow. Former Senator Jon Kyl and Vice President Mike Pence will guide him through the confirmation process.

“The nomination of Judge Kavanaugh comes after a selection process marked by an historic degree of transparency, including the President’s public disclosure of a list of 25 highly qualified potential nominees to the Supreme Court,” the White House Press Office released in a statement.