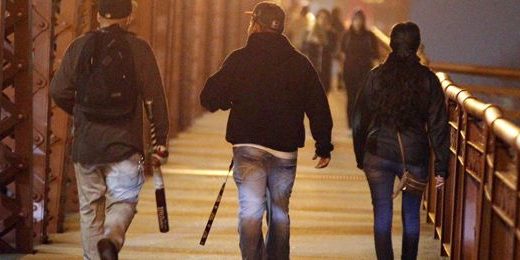 Police in Portland, Ore. declared that a once peaceful protest was a riot after demonstrators were seen attacking drivers and committing acts of vandalism during their march against Donald Trump’s election Thursday night. Portland police said at least 29 people were arrested in the riot and that more information would be given on the charges Friday morning. According to KPTV, one driver had her windshield smashed and someone painted “Capitalism kills” on a nearby convenience store. Police declared the protest a riot at around 8:30 pm. A riot is a Class C felony in Oregon.

The state Department of Transportation briefly shut down Interstate 5 between the Marquan Bridge and the Fremont Bridge due to the demonstration. Parts of Interstate 84 were also temporarily closed.

Protesters in Portland’s Pearl District were breaking windows of several businesses and some were arming themselves with rocks from a construction site, police said.

“People attending any of the various protest events are encouraged to obey all laws and be respectful of others who are using city streets, freeways and mass transit. Marching into and blocking streets is illegal, and dangerous to protesters as well as road users and has a significantly negative impact to our community. Pedestrians walking on the freeway is illegal and extremely dangerous to all road users,” Portland police said.

KPTV reported that the groups Don’t Shoot Portland and Black Lives Matter combined in Portland to become Portland’s Resistance. The founder told the station that “Trump is going to be our president. We need to save our city and hopefully allow people to come here to be a city where there is hope.” Anti-Trump demonstrations erupted across the U.S. for the second straight night. From Portland to Chicago to New York and parts in between drew a couple hundred people.

In New York City, a large group of demonstrators once again gathered outside Trump Tower on Fifth Avenue Thursday night. They chanted angry slogans and waved banners baring anti-Trump messages. “You got everything straight up and down the line,” demonstrator David Thomas said. “You got climate change, you got the Iran deal. You got gay rights, you got mass deportations. Just everything, straight up and down the line, the guy is wrong on every issue.”

In Denver, protesters managed to shut down Interstate 25 near downtown Denver briefly Thursday night. Denver police tweeted around 10 p.m. that demonstrators made their way onto the freeway and traffic was halted in the northbound and southbound lanes. Police say the interstate was reopened about half an hour later as the crowd moved back downtown.

Earlier protests in Denver, Boulder and Colorado Springs on Wednesday and Thursday went off peacefully.

In San Francisco’s downtown, high-spirited high school students marched through, chanting “not my president” and holding signs urging a Donald Trump eviction. They waved rainbow banners and Mexican flags, as bystanders in the heavily Democratic city high-fived the marchers from the sidelines.

Hundreds of protesters demonstrated outside Trump Tower in Chicago and a growing group was getting into some shoving matches with police in Oakland, California.

Another protest was building in Los Angeles, where 28 people were arrested Wednesday for blocking traffic during a demonstration that also saw vandalism to some buildings and a news truck.

Los Angeles Mayor Eric Garcetti, a Democrat, condemned what he called a “very, very small group of people” that caused problems in that demonstration but said he was proud of the thousands more that peacefully protested.

“I actually thought it was a beautiful expression of democracy. I think it was a marvelous thing to see the next generation of this country get engaged and involved,” he said at a news conference, adding that at one time in his life he might have joined them.

President-elect Trump reacted for the first time to the protests on Thursday. “Just had a very open and successful presidential election. Now professional protesters, incited by the media, are protesting. Very unfair!”

As expected, the demonstrations prompted some social media blowback from Trump supporters accusing protesters of sour grapes or worse, though there were no significant counter-protests. Trump supporters said the protesters were not respecting the democratic process.