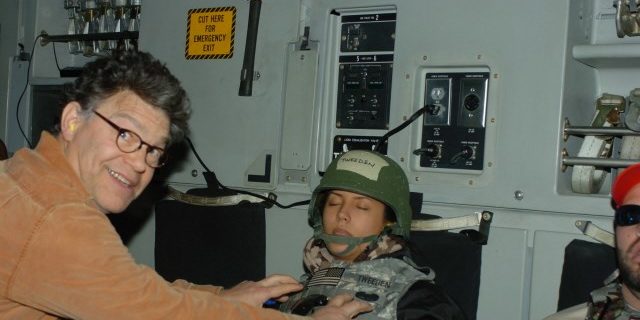 Sen. Al Franken (D-MN) groped and kissedKABC radio anchor Leeann Tweeden without her consent in 2006 on a USO Tour in the Middle East, she claims. In an article published on Thursday, Tweeden said Franken forcibly kissed her backstage during a rehearsal for a skit, and then later groped her breasts when she fell asleep on the return flight back to Los Angeles from Afghanistan.

He continued to insist, and I was beginning to get uncomfortable.

He repeated that actors really need to rehearse everything and that we must practice the kiss. I said ‘OK’ so he would stop badgering me. We did the line leading up to the kiss and then he came at me, put his hand on the back of my head, mashed his lips against mine and aggressively stuck his tongue in my mouth.

I immediately pushed him away with both of my hands against his chest and told him if he ever did that to me again I wouldn’t be so nice about it the next time.

I walked away. All I could think about was getting to a bathroom as fast as possible to rinse the taste of him out of my mouth.

I felt disgusted and violated.

Tweeden said that nobody saw the kiss, and that she didn’t tell the USO rep or the tour’s sponsor as she “didn’t want to cause trouble,” but she told others about what had happened. She said she avoided Franken for the rest of the tour and did not speak to him again outside of their interactions in the skit on stage. Franken acted “petty” towards her for the rest of the trip.

On the return flight, Tweeden said she immediately fell asleep on the plane. This was when Franken groped her breasts. Tweeden had no idea Franken touched her until she recieved a CD of photographs from the trip.

The tour wrapped and on Christmas Eve we began the 36-hour trip home to L.A. After 2 weeks of grueling travel and performing I was exhausted. When our C-17 cargo plane took off from Afghanistan I immediately fell asleep, even though I was still wearing my flak vest and Kevlar helmet.

It wasn’t until I was back in the US and looking through the CD of photos we were given by the photographer that I saw this one:

Tweeden wrote that she was worried about backlash and career ramifications if she came forward with her story. She said she felt empowered to finally tell her story about Sen. Franken in light of the #MeToo campaign about sexual assault and harassment, and she wants to inspire others to tell their stories as well.

Franken wrote in his book “Al Franken, Giant of the Senate” that he actually decided to run for office on the 2006 USO tour.

Further, Franken has been an outspoken supporter of combating sexual harassment, and even praised his Senate colleagues for sharing their #MeToo stories.

Even some of the most powerful women in government are saying #MeToo. Four senators told us of their experiences.

We must address sexual harassment. Reforming arbitration laws will ensure survivors can seek justice in court.

This is absolutely disturbing, and there’s really no other way to describe it. Franken should issue an apology and step down. This is predatory behavior and there’s no place for someone like that in the Senate. Additionally, whoever took the photograph of Franken groping Tweeden’s breasts should be investigated as well, as that’s completely immoral behavior. The proper reaction to seeing someone groping a sleeping person is to stop the attacker from touching them, not to have them pose for a picture. That should be common knowledge, but apparently not.