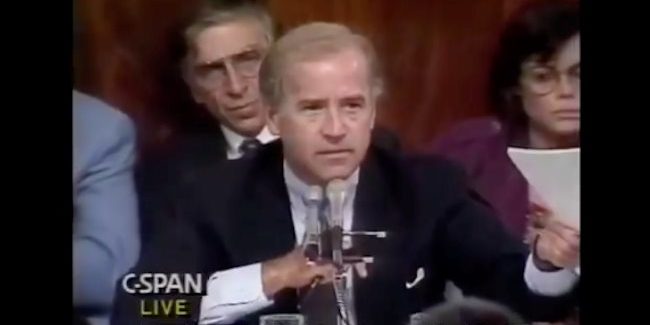 Well, look at what we have here. From NTK Network, a flashback from the Clarence Thomas hearings, who also face allegations of sexual misconduct from Anita Hill. Thomas was eventually confirmed, but by a razor thin margin. There was an FBI report, but then-Senate Committee chair Joe Biden (D-DE) said it was worthless to cite. Why?

“FBI explicitly does not, in this or any other case, reach a conclusion, period. Period,” said Biden at the time.  “The reason why we cannot rely on the FBI report—you would not like it if we did—because it is inconclusive. They say, ‘He said, she said, and they said. Period,” he added

Quite the find from @NTKNet. Sen. Biden is very informative in this clip. pic.twitter.com/HUeyZKupPC

In this current Supreme Court fight, Christine Blasey Ford and Deborah Ramirez have lobbed allegations against President Trump’s Supreme Court nominee, Judge Brett Kavanaugh. Ford alleges a drunken 17-year-old Kavanaugh tried to sexually assault her at a high school party, while Ramirez alleges he exposed himself at a party at Yale. Both cases lack evidence. And by lack, I mean there is none. It’s unprovable. Witnesses in both cases also refute the accuser’s story. Ford can’t remember how she got to this particular house party, who planned it, or who owned the house. For Ramirez, her story is so shoddy that The New York Timesdidn’t do a deep-dive because they couldn’t confirm anything. The New Yorker did run a piece by Jane Mayer and Ronan Farrow.

In the meantime, because it’s a he said, she said—Democrats, Ford, and their respective minions are demanding an FBI investigation. It’s a crock. It’s meant as a delay tactic. The lack of evidence in this instance also contributes to the added pressure placed on the GOP to delay the Senate Judiciary Committee vote, as both sides sort through the details. Keep in mind that the Ford allegation was dropped at the last minute because Sen. Dianne Feinstein’s office, which received Ford’s letter detailing the incident in July, decided to release it at zero hour after sitting on it for weeks. The timing is suspect, of course. Ford also retained the legal services of an anti-Trump lawyer and took a polygraph administered by an unknown former FBI agent. These aren’t the actions of a woman who wanted to remain anonymous, as reports say. This is someone who was preparing to go public. It reeks of a political hit job. Period. And the clamoring for an FBI investigation is part of their main offensive drive: run out the clock. Delay until after the midterms so hopefully the Democrats will be on a better position on the hill to block this nomination. The Left is weaponizing baseless, unsubstantiated gossip to destroy a man’s life, his career, and to maximize their political clout in D.C. It’s nasty, but that’s politics. Democrats are on a war footing. It’s time the GOP does as well. If Ford doesn’t show up for the scheduled hearing on Thursday, Republicans need to hold a vote.