Swetnick’s Ex-Boyfriend: She’s Unstable and Threatened to Kill My Family 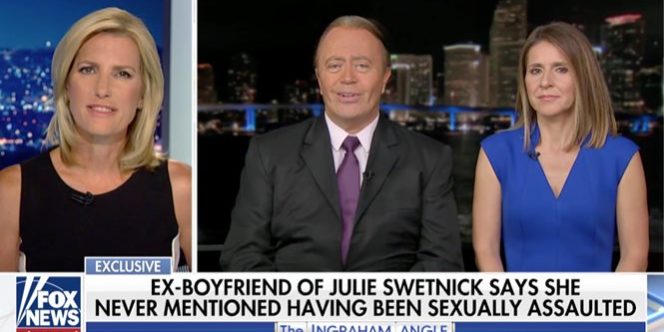 We’ve already seen a statement from Julie Swetnick’s ex-boyfriend warning the American public that she isn’t credible at all.  But on Monday, Richard Vinneccy provided even more disturbing details about his former girlfriend, including that she threatened to kill his unborn child and egged him on to hit her when they had arguments.

“Right after I broke up with her, she basically called me many times and at one point she basically said, ‘You will never, ever see your unborn child alive,'” Vinneccy told Fox News host Laura Ingraham on “The Ingraham Angle.”Vinneccy recalled that Swetnick told him at the time, ‘I’m just going to go over there and kill you guys.'”

In their seven years of on-and-off dating, Vinneccy said that even during small arguments she’d urge him to hit her. In the interview, he claimed to know Swetnick better than anyone and said she never brought up her gang rape allegations against Kavanaugh. “Never, never once [did] she mention that to me,” he said. “We used to talk about everything. She never once mentioned that at all. … If you ask me personally if I believe her, I don’t believe her. I really don’t believe her. Nobody knows Julie Swetnick better than me.”

He continued: “She always wanted to be the center of attention. . .. She was exaggerating everything. Everything that came out of her mouth was just exaggerations.” He said he did not follow through on getting a restraining order against her because he was afraid of provoking her.  “I knew that I had to see her again. … I didn’t want to provoke her,” he said. “I knew the type of person Julie is, and I was afraid. So we decided to just leave it alone. At the time, the only thing I was concerned [about] was my family. So we decided to change our numbers, and move. And after that, we never heard from her again.”

Swetnick’s attorney Michael Avenatti dismissed Vinneccy’s claims about his client in an interview on CNN Monday night, saying he “can’t be trusted.”