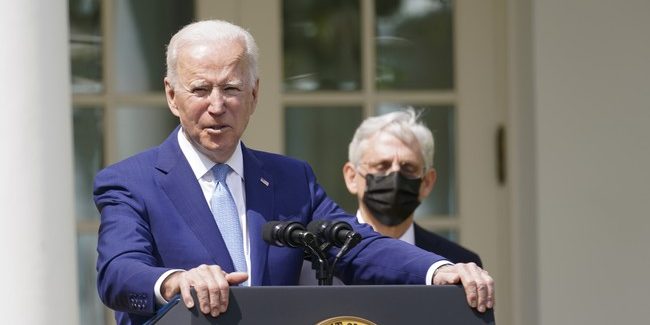 As Katie and I covered, Attorney General Merrick Garland on Thursday threatened Gov. Greg Abbott (R-TX) with legal action over an executive order he signed on Wednesday which stopped ground transportation of illegal immigrants who might test positive and which directed any vehicle suspected of such a violation to be stopped and turned back. After Gov. Abbott refused to back down, Garland stayed true to his word and sued the state and its governor on Friday.

As Annika Kim Constantino reported for CNBC on Friday:

“No State may obstruct the Federal Government in the discharge of its constitutional responsibilities,” the department said in its complaint filed with the U.S. District Court for the Western District of Texas in El Paso.

Gov. Abbott has been quite firm in the justification for the order, which made clear its intent to protect Texans from those “who pose a risk of carrying Covid-19 into Texas communities.”  The warning letter from Attorney General Garland claimed that the order “would jeopardize the health and safety of noncitizens.” But, as the governor pointed out, “It is clear from the arguments in [Garland’s] letter that the State of Texas and the federal government face a constitutional crisis.”

While Biden is openly pondering shutdowns and mandates on U.S. citizens, the Administration is knowingly worsening the problem by importing COVID at extreme rates across the southern border.

Gov. Abbott tweeted a statement in response to the lawsuit, as he has done throughout the back-and-forth between him and Garland.

The Biden Administration has created a constitutional crisis between the federal government and the State of Texas. This stems from the Biden Administration’s refusal to enforce immigration laws and allow illegal immigrants with COVID-19 to enter our country. As our communities are overrun and overwhelmed by the record-high influx of migrants, cartels and smugglers profit off the chaos. Not only that, but this crisis also extends beyond the border as deadly drugs like fentanyl infiltrate our communities.  This already dangerous situation continues to deteriorate as the Biden Administration knowingly imports COVID-19 into Texas from across the border—willfully exposing Texans and Americans alike. President Biden has a duty and a responsibility to protect and uphold our nation’s sovereignty, yet he has long-since abdicated his authority to do so.

“As the Governor of Texas, I have a responsibility to protect the people of Texas—a responsibility that grows more urgent by the day while the Biden Administration sits on the sidelines. I take very seriously my duties and responsibilities as the Governor of the State of Texas. I have the authority, and duty, under the constitutions of the United States and of Texas to protect Texans and our nation. I also have the authority under long-established emergency response laws to control the movement of people to better contain the spread of a disaster, such as those known to have COVID-19. My duty remains to the people of Texas, and I have no intention of abdicating that.

“Until President Biden and his Administration do their jobs to enforce the laws of our nation and protect Americans, the State of Texas will continue to step up to protect our communities and uphold the rule of law.

As Julio has been reporting, the police departments are not being told about illegal immigrants in the area testing positive until after the fact.  This includes La Joya but also Welasco, as was reported on Friday.

Such a legal battle comes while the Biden administration has instituted vaccine mandates for federal workers. While speaking to reporters on Friday, the president responded that Americans can “in all probability” expect  “more guidelines… more restrictions.”

The fight for consistency is occurring not only in the state of Texas, but at the U.S. Capitol with Texan representatives, first and foremost Rep. Chip Roy (R-TX), who, in his opposition to a mask mandate instituted for the House floor and House buildings, as spoken about such hypocrisy.