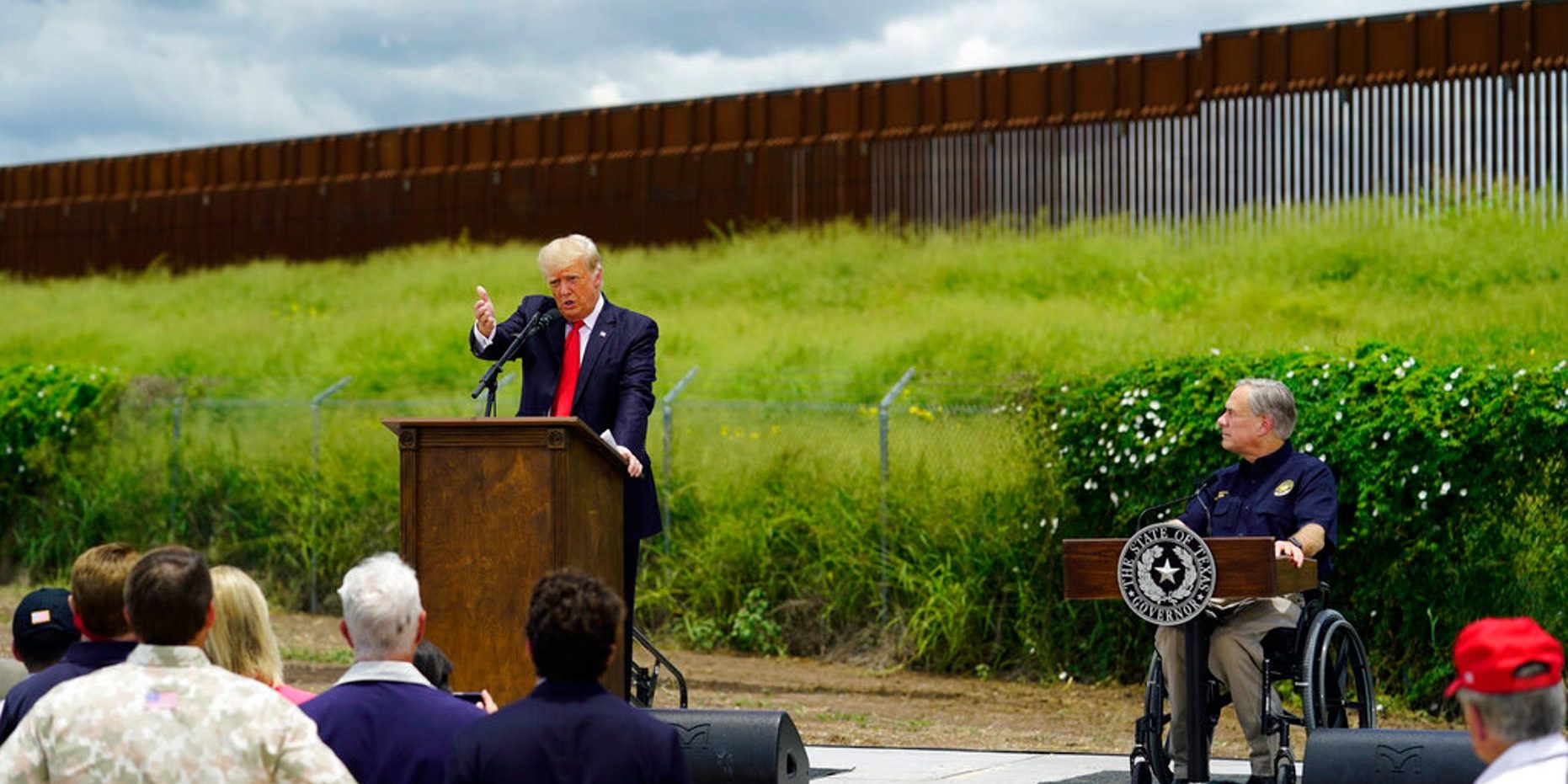 Former President Trump returned to the U.S.-Mexico border Wednesday, taking direct aim at President Biden for the surge this year in migrants crossing the barrier.

“There has never been a border so secure as the southern border that we had, and now it’s opened up,” the former president emphasized as he sat down for a briefing from Republican Gov. Greg Abbott of Texas and Lone Star State law enforcement and border officials. And slamming Biden, who reversed key immigration policies implemented during the Trump administration, the former president charged that “now we have an open, really dangerous, border. More dangerous than it’s ever been in the history of our country, and we better go back fast.”

Biden has ended many of the restrictive immigration polices implemented by Trump, who repeatedly pledged during his successful 2016 campaign for the White House to build a border wall and make Mexico pay for the construction. Trump made border security a top policy during his administration and in 2019 declared a state of emergency in order to divert federal funds heading to the military to pay for the border wall. Besides halting construction of Trump’s wall, Biden also ended a program that forced migrants to stay in Mexico as they waited for resolution to their U.S. asylum cases, as he aims to follow through on his 2020 campaign pledge for a more humane immigration system. Arrests along the southern border with Mexico have surged this year to their highest monthly averages in two decades, with Republicans blaming Biden’s immigration policies for the influx.

“We had all these great polices going and they were ended. One day, they were all ended. This didn’t take place over three months or five months. This took place in the first week, they were ended. It was almost like they were ended because I did it,” Trump argued as he spoke at the briefing in Weslaco, near the southern tip of Texas. “We’re going to admire the wall and how it works,” Trump said at the end of the briefing as he and Abbott headed out to tour an unfinished part of the border wall.

Speaking ahead of Trump, Abbott called the former president “a great friend to Texas” who “stepped up and he secured our border and kept Texas and America safe.” Abbott charged that “things have changed so quickly and so dramatically under the Biden administration. It has been amazing and disastrous.”

“The people of Texas have been pleading for us to be able to step up and help restore safety and security in their lives and is exactly why Texas is stepping up and doing a job that is truly the federal government’s job – a job that you did but a job that the Biden administration is completely failing us on,” the governor emphasized.

Abbott also criticized the Biden administration for their emphasis in trying to tackle the roots of the crisis. After heavy criticism from Republicans and even a few Democrats, Vice President Kamala Harris – who’s been tasked to steer aspects of the administration’s handling of the immigration crisis – toured the southern border last week.

Republicans have signaled that they hope to make border security and the wider issue of immigration a key issue in next year’s midterms, as they aim to win back majorities in both the House and Senate. Support for building the U.S.-Mexico border wall is up – and now matches a previous high, according to the results of a Fox News national poll conducted in May. While voters had mixed views on the wall, the 50% who favored it in May matched the record set in 2015 – and the 46% opposed was a new low. The results marked a reversal from a Fox News poll in December 2019, when 44% favored it and 52% were opposed. Border security also appears to be an issue that the current president is struggling with when it comes to public opinion.

Biden stood at 56% approval and 42% disapproval in a Fox News poll released last week. But when it comes to the issue of immigration, the president’s underwater at 41% approval and 54% disapproval. The Democratic National Committee is blasting the trip, charging on the eve of the visit that “Donald Trump and Republicans are bringing their clown show on the road in a desperate attempt to try to spin their cruel border policies to mislead voters.