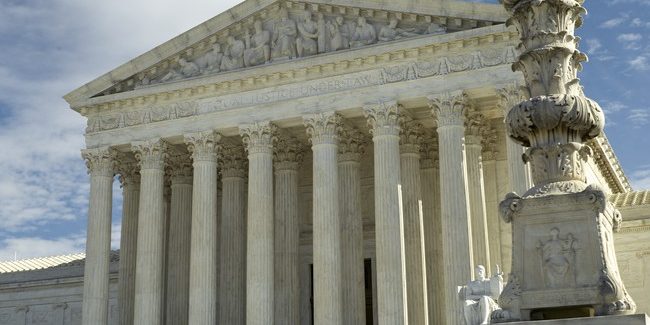 The Supreme Court upheld Arizona’s voting law that cracks down on ballot harvesting and takes aim at mail-in ballot fraud, despite a challenge from the Democratic National Committee (DNC). The high court ruled that the reforms in Arizona’s law do not violate the Voting Rights Act (VRA). Chief Justice Roberts and Justices Alito, Kavanaugh, Gorsuch, Thomas, and Barrett sided with Arizona Attorney General Mark Brnovich, while Justices Kagan, Breyer, and Sotomayor said that the law violates Section 2 of the VRA.

“The present dispute concerns two features of Arizona voting law, which generally makes it quite easy for residents to vote. All Arizonans may vote by mail for 27 days before an election using an ‘early ballot,’” Justice Alito wrote for the majority opinion. “The regulations at issue in this suit govern precinct based election-day voting and early mail-in voting. Voters who choose to vote in person on election day in a county that uses the precinct system must vote in their assigned precincts. If a voter goes to the wrong polling place, poll workers are trained to direct the voter to the right location…In light of the principles set out above, neither Arizona’s out-of-precinct rule nor its ballot-collection law violates [section 2] of the VRA. Arizona’s out-of-precinct rule enforces the requirement that voters who choose to vote in person on election day must do so in their assigned precincts. Having to identify one’s own polling place and then travel there to vote does not exceed the ‘usual burdens of voting.’”

Brnovich said that the court’s decision is a win for election integrity in Arizona and nationwide.

Republican National Committee (RNC) Chairwoman Ronna McDaniel also weighed in on the big loss for the DNC, applauding the court for seeing through Democrats’ “partisan lies.”

“Today’s United States Supreme Court ruling is a resounding victory for election integrity and the rule of law. Democrats were attempting to make Arizona ballots less secure for political gain, and the Court saw right through their partisan lies. In Arizona and across the nation, states know best how to manage their own elections,” McDaniel said in a release. “The RNC is proud to have worked closely with the Arizona GOP to support this historic victory, and we will continue our comprehensive efforts to make it easier to vote and harder to cheat.” While the Supreme Court sides with common-sense voting reforms, the Biden administration is suing Georgia for the newly-enacted voting law that also aims to crack down on fraud while expanding access to the ballot box.