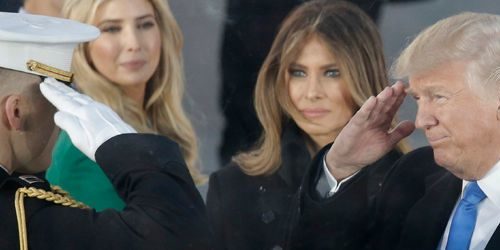 The moment Donald Trump swears the oath of office and lifts his hand from the Bible as the 45th president of the United States on Friday, the clock begins on his first 100 days. And within hours, the man who campaigned as an outsider vowing to shake up Washington will have his chance to start rolling back his predecessor’s legacy while forging his own.  The president-elect is set to take the oath shortly before noon, after spending Thursday meeting with supporters and getting his team in place. Incoming White House Press Secretary Sean Spicer would not give specific details about the extent and timing of Trump’s promised actions to turn back some of President Obama’s policies — but he promised a “robust” start. \”Make no mistake, we’re ready to go on Day One,” he said Thursday. Spicer said earlier that Trump has a “few” executive actions, “probably in the area of four to five, that we’re looking at on Friday.” From there, Trump will be under pressure to begin working on his 100 days bucket list, which he detailed in a speech delivered in Gettysburg, Pa., last October. Trump’s “Contract with the American Voter” outlines his plans for the “kind of change that only arrives once in a lifetime” — including 18 major action items. Based on that contract, here’s some of the more significant changes the 45th president could have in store for America:

Trump wants to “fully” repeal the Affordable Care Act and replace it — with what, is not yet entirely clear. His campaign plan called for using “Health Savings Accounts,” and allowing insurance to be bought across state lines. Trump says he’s still working out the details and will soon have a new proposal, which based on recent interviews also could include taking on the pharmaceutical industry.

Trump has vowed to cancel “all federal funding” for so-called sanctuary cities as he moves to toughen immigration enforcement. He’s vowed to “begin removing” the “criminal illegal immigrants” from the country at the start of his term, and to suspend immigration from “terror-prone regions where vetting cannot safely occur.”  Trump also promised to work with Congress to introduce a so-called “End Illegal Immigration Act,” which would seek a range of changes including setting a two-year minimum federal prison sentence for illegaly re-entering the country after a prior deportation. The legislation, according to his campaign document, also would “fully” fund a U.S.-Mexico border wall, with the understanding that Mexico would reimburse the money — something Mexican politicians say they won’t do.  Trump also could move to turn back some of Obama’s executive actions that gave a deportation reprieve to some illegal immigrants.

Trump has vowed a set of ethics measures as part of his “drain the swamp” mantra.  While Democrats have accused Trump of not living up to that pledge given the connections of some of his Cabinet nominees, he set ambitious targets during the campaign. This included a constitutional amendment to set term limits on members of Congress; a hiring freeze on federal employees; a requirement that any new regulation be offset by the elimination of two existing regulations; a five-year ban on White House officials becoming lobbyists after leaving government; and a permanent ban on White House officials lobbying on behalf of a foreign government.

Trump talked tough on trade even before he was a candidate, and is vowing to turn those words into action in the White House.  He has said he’d direct his Treasury secretary to label China a currency manipulator; remove restrictions on American energy production; allow projects like the Keystone pipeline to move forward; and direct certain U.N. funding toward American infrastructure projects.  Trump also said he’d work with Congress on legislation meant to grow the economy 4 percent per year and create at least 25 million jobs. The package would include tax reforms, trade reforms and regulatory relief, as well as help for the energy industry. On taxes, his campaign vowed to cut the number of tax brackets from seven to three and lower the corporate tax rate from 35 to 15 percent.  Further Trump says he’d establish tariffs to discourage companies from offshoring.

Trump would hardly be alone in turning back some of his predecessor’s policies.

According to the website FiveThirtyEight, Obama signed 19 new executive orders and reversed nine of the orders signed by President George W. Bush in his first 100 days. Eight years earlier, Bush signed 11 new executive orders and revoked 4 Clinton-era actions. The 100-day benchmark dates back to Franklin Delano Roosevelt, who came into office in 1933 and unleashed a flurry of activity. Over the course of 105 days, Congress passed 76 bills – far exceeding current trends. By contrast, statistics compiled by Govtrack show just seven bills were passed during George W. Bush’s first 100 days in 2001, and 11 in Obama’s in 2009.

“I am not sure it is as relevant as it once was in this age of new media and increased partisanship. The historical comparison to FDR is not a good gauge since he came into office at a time of national crisis with Democratic control of Congress and a mandate to act,” said Karlyn Bowman, a senior fellow at the American Enterprise Institute. Jason Grumet, president of the Bipartisan Policy Center, agrees that the measure is out of step with current legislative and political realities.

“The whole idea of 100-day agenda is fundamentally at odds with the political reality of 2017 and actually has the potential to undermine the presidency if [Trump] chooses to run roughshod over the Congress,” he told FoxNews.com. The 100 days may not be important in historical terms, but it is important in setting a tone.

“While Trump needs to get off to a clean start and take quick, decisive action, I think he would be well-advised to break his agenda into three parts – a hundred hours, weeks and months,” said Bill Whalen, a research fellow with the Hoover Institution.

In the meantime, Whalen suggests the new administration address the issues most important to his base – repealing ObamaCare and the Supreme Court. A Politico/Harvard University poll found Trump voters rank ObamaCare as their top priority. However, it is only the second priority for the general public. Several political and policy obstacles lie in the administration’s path starting with the confirmation of Rep. Tom Price as secretary of Health and Human Services, noted Paul Howard, director of health policy at the Manhattan Institute. “The good thing is that the last administration has left behind a lot of administrative flexibility to lay the groundwork for repealing ObamaCare, but it is crucial they get Price confirmed and get some victories behind him,” he said.  According to Howard, if the intention is to simultaneously repeal and replace the law, Trump will need to cut some deals with moderate Democrats to avoid the mistake Obama made in passing it. The self-professed dealmaker also promised action on jobs by either withdrawing from or renegotiating NAFTA and withdrawing from the Trans-Pacific Partnership. Both efforts may set up an early battle with the pro-free trade GOP leadership in Congress.

“The president has wide latitude to act on trade issues, so one of the significant early questions will be how willing Congress will be to accept his authority on trade,” Grumet said.