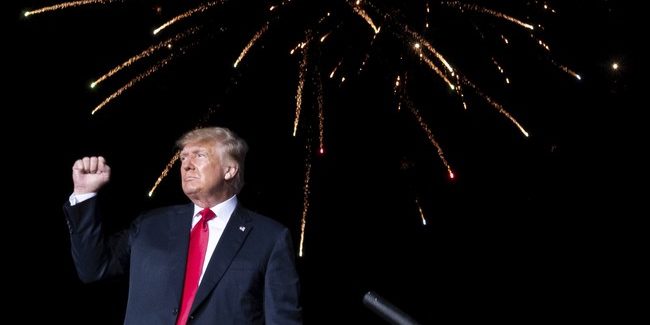 Will this happen? Probably not, but the fallout would be delicious. I’m all for anything that shakes Congress up. Donald Trump certainly did that, and who knows what could have been if the Democrats, the liberal media, and the Deep State didn’t boot the man from office. Yet, Trump’s return in the form of Speaker of the House post-2022 would trigger a level-five meltdown, which is exactly what Mark Meadows, Trump’s former chief of staff, aptly noted yesterday (via Newsweek):

“I would love to see the gavel go from Nancy Pelosi to Donald Trump,” Meadows said on Steve Bannon’s War Room Thursday.

“People would go crazy. As you know you don’t have to be an elected member of Congress to be the speaker. She would go from tearing up a speech to having to give the gavel to Donald Trump,” Meadows added, referring to Pelosi ripping up her copy of Trump’s State of the Union speech in February 2020.

Oh, she would have to be on a ton of pills should this scenario ever occur. She’d have to go comatose. And Joe Biden would probably diarrhea all over the cameras again just like he reportedly did in front of Pope Francis. The Speaker’s gavel in Trump’s hands would be tremendous. It would certainly smash the Capitol Dome. It would be a wet sloppy kiss to the left—and we should all be rooting for it. Yet, it’s just a dream, and there’s inside politics here. Namely, that Mark Meadows is not a Kevin McCarthy fan. He worked to block the GOP leader from getting the votes for the gavel in 2015. Looking past the feuds, you cannot deny that Trump as Speaker would be entertaining as hell. It would also give him a new case for the restoration of his First Amendment rights on social media.

The Republicans are poised to have a great midterm season. Joe Biden’s approvals are in the toilet. The GOP has a ten-point lead on the generic ballot, the largest gap ever recorded by The Washington Post. The Democrats have a split chamber in the Senate and a slim four-seat majority in the House. It’s going to happen, Democrats. We’re retaking Congress. Bank on it, but probably not Trump as Speaker as much as I would love for that to happen.

The January 6 committee sham, Pelosi having to give that gavel to Trump, his dealings with Joe Biden, etc., would ruin the left. We can only dream.