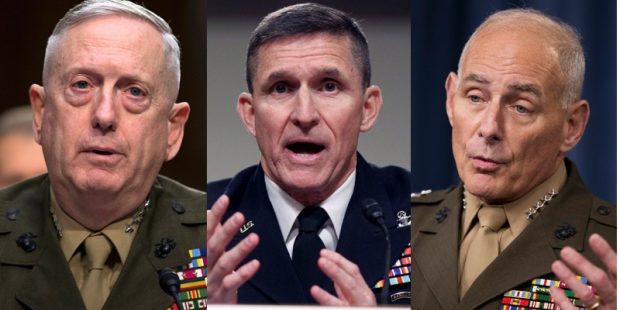 When retired U.S. Marine Corps Gen. John Kelly was sworn in as White House chief of staff last week, he took command of a Trump administration that now has more military commanders in top spots than any since Eisenhower’s. The generals hand-picked by Trump — Kelly, National Security Adviser H.R. McMaster and Defense Secretary James Mattis — share a penchant for passing their opinions up the chain of command in the bluntest of terms. Their prominence in the administration belies the common perception the commander in chief prefers to be surounded by yes men. “Jim Mattis defines ‘speaking truth to power’ in my view, and I like to think I do as well,” Kelly told Fox News in an exclusive interview. “I observed him do it routinely — every day — as we planned the invasion of Iraq and its aftermath.”

A fourth general, Joint Chiefs Chairman Joseph Dunford, is a holdover from the prior administration yet shares many of the same qualities that have endeared other high-ranking military men to Trump. Kelly had already earned Trump’s approval by serving as Homeland Security secretary during the first six months of his administration. His no-nonsense pursuit of Trump’s agenda on immigration and terrorism prompted Trump to brand him a “star,” and tap him to succeed Reince Priebus as chief of staff. The job, which has traditionally been the domain of civilian leadership, makes Kelly the president’s top adviser.

Mattis, who famously said he devises a contingency plan to kill everyone he meets, required an act of Congress to get the job, since he hadn’t been out of the military long enough when he was appointed to his role. Once he got the waiver, he breezed through confirmation by an 81-17 vote. “He’s a humble man with very little to be humble about,” William Cohen, who served as President Clinton’s Pentagon secretary, said of Mattis.

The careers of all four men have intersected over the years. Kelly, Mattis and Dunford came up through the Marines and all are in their 60s. McMaster is younger, at 55, and came up through the Army. Yet all have made their reputations on both the battlefield and, in recent decades, the Pentagon boardroom.

Kelly was a captain in the 4th Marine Expeditionary Unit when he first met then-Lt. Col. Mattis in the Persian Gulf War, “but really got to know him right after 9/11 when I became his assistant division commander in the 1st Marine Division, Camp Pendleton, California.” That was the summer of 2002. The two Marines then deployed to Kuwait later that year, and lived together in the desert until the U.S.-led invasion of Iraq started in March 2003. After leading a column into Baghdad, Kelly and Mattis led Marines in the intense combat over Al-Anbar province which went into full-scale revolt in 2004.

McMaster, once described as a “blunt-spoken bulldog of a man”, was passed over for promotion to brigadier general twice for “making too many enemies to rise past the rank of colonel” before getting his first star. He replaced another general favored by Trump, Mike Flynn, as national security adviser and has continued to ruffle feathers – on the right and left.

As the generals have taken command of the West Wing, including reportedly limiting who the President can see and what he can read, all three have come under intense scrutiny by both right and left.

Michele Flournoy, said to be in the running for Secretary of Defense had Hillary Clinton won the election, worried that “putting too many former senior general officers into civilian positions can be cause for concern in a democracy where we pride ourselves on civilian control.”

A top-level Washington government executive said recently about the widely-respected members of President Trump’s administration, “why would they risk their careers to be around such a man?” That criticism was echoed by Cohen in an interview with Politico. “The larger point is, whether it’s Kelly, Mattis or McMaster, you can spend a lifetime building credibility, and lose it overnight,” Cohen said.

McMaster, meanwhile, has come under fire from right-wing allies of White House Chief Strategist Steve Bannon — himself a former Navy lieutenant — for working for a think-tank that was funded by George Soros, the billionaire financier of leftist causes. With a president caught between a Bannon wing focused on domestic priorities and a military wing focused on winning wars, Kelly said he’s aware that the responsibility of the three generals is to advise, not command, inside the White House.

“Remember, telling the unvarnished truth to power doesn’t mean you always get your way,” Kelly told Fox News. “The principal ultimately decides and it is our way that so long as that decision is legal, moral, and ethical, one salutes and executes. Sometimes you win and sometimes you don’t.”