What Role Could Latinos Play in the California Recall? 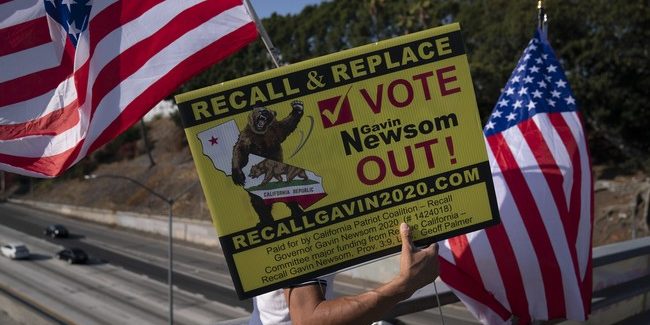 After months of efforts, the election whether to recall Gov. Gavin Newsom (D-CA) is upon us, with the polls closing this Tuesday at 8pm local time.

For the past few days leading up to the recall, the polls have been favoring Newsom. According to FiveThirtyEight, as of Monday night 57.4 percent want to keep Newsom and 41.5 percent want to recall him. Voters will vote whether or not to recall Newsom and if they vote to do so, they then cast their vote for who they think should replace him. The leading candidate in that case is Larry Elder, a Republican. César Ybarra, the senior director of legislative affairs at FreedomWorks who was born in Mexico and became a naturalized citizen after moving to Southern California, shared that he believes it will come down to turn out. In speaking with Townhall, Ybarra focused on turnout from the minority communities, especially Latinos.

“Whatever happens on Tuesday,” Ybarra said, “whatever the Latino turnout is for the ‘yes’ or ‘no,’ I think the important thing is to continue talking about the fact that there is a trend that’s alive and well of Latinos turning more towards the right side of the political spectrum.”

When it comes to the recall election in particular, when it comes to “making Democrats work for the Latino vote,” Ybarra sees it as a positive and an encouraging sign for the conservative movement that it has come to this. He spoke to how it shows the conservative movement’s message is “resonating” and that it “demonstrates that there is a platform and more room for us to grow this movement.”

The fact that there even is such a conversation about Latinos in such a way gives Ybarra hope that candidates “aren’t taking the Hispanic vote for granted anymore” and the vote will be more so about policies rather than just coming down to Democrat or Republican.  In his interview with Ybarra for El American, Edgar Beltrán highlighted an Emerson College poll which showed Newsom’s popularity is less than stellar among minorities. In a poll from late July/early August, it was noted that “Hispanics are the only racial group in favor of the recall (54% recall/41% keep).”

Ybarra had also told Beltrán when asked about “priorities” of the demographic that “Latinos just want to work, not pay so many taxes, and have good schools for their children, as he went on to point out that “whas happened in Newsom’s administration is the opposite of that; the state of California is one of the most expensive to live in, the taxes they have to pay, particularly property taxes are very high. We have to remember that Hispanics tend to work in small businesses like restaurants.”

Of course, the pandemic changed things. “What happened in 2020? All these restaurants closed. The governor told them: You have to close and not go to places where people congregate,” Ybarra reminded Beltrán.

Beltrán and Ybarra likewise reminded readers of Newsom’s dining at French Laundry in November. “He can, but the Hispanic cannot. And the truth is that this bothers people a lot, that politicians have some rules for themselves and others for the citizens,” Ybarra said. Such anger, then, could send a message to Democrats and Newsom. Even if Newsom survives the recall, though, that there is at least a conversation about Latinos is nevertheless telling.

When it comes to the vision Ybarra has for Latino outreach, he emphasized to Townhall that it’s about “continuing to education people,” as he acknowledged that the demographic did not turn out for the Republican candidates in 2020. He sees it worthwhile to be optimists and “happy warriors” when it comes to such efforts.

Regardless of the outcome of Newsom’s recall election, it looks as if Latino outreach and voter engagement will be a topic that is here to stay. According to a fact sheet this month from the Public Policy Institute of California, Latinos make up 35 percent of the state’s population, and 22 percent of likely voters in California.