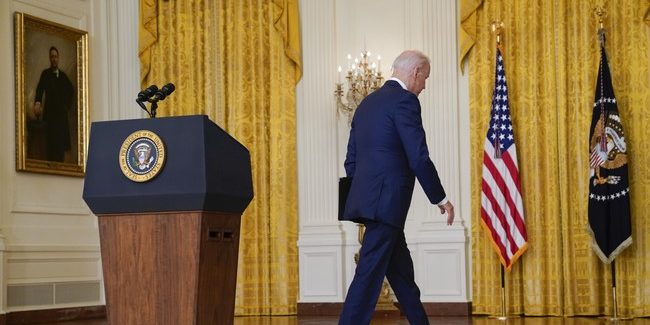 I mean, you can probably guess what happened to this woman. She was left behind. The woman named “Nasria” is one of the hundreds of Americans that Joe Biden said ‘sayonara’ to when we left Afghanistan on August 31. We had to be out of there. The troops had to go; Joe didn’t want to upset the Taliban. The US caved to terrorists, despite Biden saying that we would stay until every American was out. That was a lie. We left and now after a few speeches about Afghanistan, which were trainwrecks, he thinks this issue is settled. Biden has moved on. He moved on weeks before this fiasco of an evacuation began. The Biden administration said that all these people had to do was contact the State Department and they, like Travelocity, would work on ways to get them out.

Before the deadline for exit, White House press secretary Jen Psaki said that their “expectation” was Americans attempting to flee through the Kabul airport would be able to do so despite the Taliban stating that they would no longer allow that to happen. In that same answer to a reporter, she emphasized the State Department was working with individuals trapped in the city to arrange specific times to arrive at the airport and have their evacuation facilitated.

But that is not what happened to the California woman going by “Nasria” in the exclusive VOA interview with VOA Pentagon correspondent Carla Babb. Instead, her passport, which she displayed in photos and video she shot from the chaos of her multiple attempted escapes, was not accepted or given any special treatment at Taliban checkpoints. As might be one’s actual expectation.

Her harrowing account is all the more poignant for the fact that she was in Afghanistan getting married, and the fact that she is pregnant. It’s all the more infuriating to hear because she followed all the instructions and advisements for the evacuation, including being in touch with the State Department. Not being in touch was repeatedly cited by the Biden administration as a reason that people were trapped.

Yeah, Biden left her. If she sounds familiar, she’s the same woman who reported that the Taliban was hunting Americans stranded in the country.