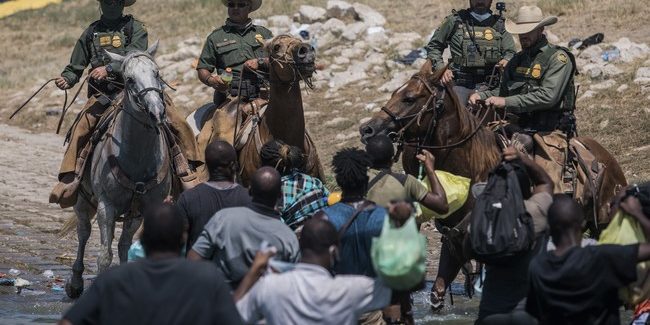 Mainstream media outlets are, with egg on their face, issuing clarifications and corrections to their stories that falsely smeared Border Patrol agents who were defending America’s southern border for actions they didn’t take using equipment they don’t have.

The timing makes sense as attention strays again from the U.S.-Mexico border following an influx of some 15,000 illegal immigrants — many of them Haitians who’d previously fled to South America — who set up a makeshift “Bidenville” under the International Bridge in Del Rio, Texas. Despite the half-hearted mea culpas, their mission to distract from the border crisis by creating a new boogeyman has already done its damage.

The El Paso Times, one of the original propagators of the phony story, issued a meek “clarification,” rather than a correction or retraction which would have been more suited to the literal fake news that launched a national firestorm and triggered condemnation from the White House that caused an investigation by the Department of Homeland Security.  “Clarification: Our reporting team witnessed at least one agent on horseback swing his reins like a whip. We have updated the story to clarify that fact since it was not an actual whip,” reads a note attached to the top of The El Paso Times’ story.

They may call it a “clarification,” but it’s truly a correction to a story that undermines the point of the entire piece. If border agents were not using whips to beat Haitians in the Rio Grande, then the rest of the narrative that’s still published is moot. The brave agents were doing the duty they’re assigned, trying to keep people from illegally crossing the U.S.-Mexico border, a task that’s become nearly impossible thanks to President Biden’s immigration policy.  The folks over at Axios deleted their tweet pushing the fake narrative about the Border Patrol and tweeted that they had updated the phony story “to include comments from some journalists on the border who did not see whipping occur.”

In fact, no journalists on the border saw Border Patrol agents whipping Haitians, because that didn’t happen. There were no whips and illegal immigrants were not attacked by border agents. Some “saw” what they wanted to see in order to advance a narrative and give some cover to the Biden administration while demonizing law enforcement, but the reality was that nothing untoward took place.

And then there’s the gray lady, which issued a correction admitting “an earlier version” of their story “overstated what is known about the behavior of some Border Patrol agents on horseback.” That’s a delicate and sanitized way of saying they botched a report and bought into phony outrage over a falsified incident.

The New York Times correction continues, saying “While the agents waved their reins while pushing migrants back into the Rio Grande, The Times has not seen conclusive evidence that migrants were struck with the reins.”

Again, of course The New York Times hasn’t found evidence that migrants were struck with reins, because they weren’t. As Julio reported, the reins being spun in circles serve the purpose of guiding a horse and keeping individuals from being trampled under a horse’s hooves.  By and large, the mainstream liberal media personalities who tweeted with a poorly-hidden enthusiasm about what they could have verified quite easily was a false story did nothing to correct the record. News outlets advanced the fake story and liberal personalities were more than happy to pour gas on the fire by tweeting the links far and wide.

They ran the phony news all the way to the White House, to President Biden, to DHS Secretary Mayorkas, and they got their intended result: he President of the United States saying the falsely accused agents would “pay” for something they didn’t do. They got DHS to suspend its mounted patrols. They took attention in Del Rio, Texas, off of President Biden’s unmitigated border crisis and put it on a common scapegoat for the Left: law enforcement.

The unjust smear of sworn officers on the front line of the Biden administration’s illegal immigration crisis is shocking for its brazenness, but unfortunately unsurprising for the Democrat-Media Complex.