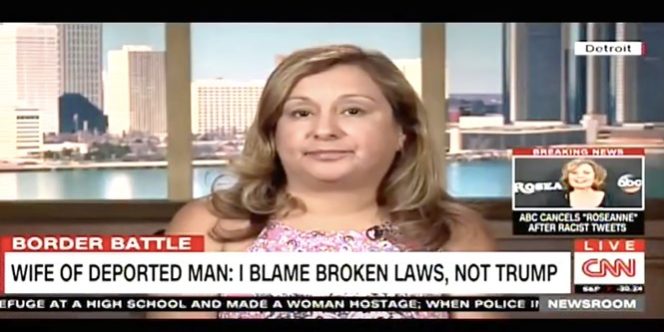 Because I showcased some of the most ridiculous rhetoric and “outrage” surrounding the immigration issue earlier in the week, I figured I owe it to you to highlight this surprisingly rational and measured take from a fairly unlikely source.  First, imagine watching your spouse get detained and deported by ICE agents after he or she had lived and raised a family in America for three decades, having otherwise being a law-abiding and productive member of society.  Now imagine being invited to talk about that ordeal on CNN and saying…this (via the Free Beacon):

“I am not upset at our government due to the fact that I am a U.S. citizen and that our laws come first. Our laws are just broken and need to be fixed, but I can’t be mad at Trump for doing his job because that is his job to protect us, as U.S. citizens, from criminals. The only thing is my husband was not a criminal and those are the laws that need to be fixed because they are broken for the people … brought as children, doing the right thing, and have never committed a crime. For the criminals that have come here illegally, they need to go back.”

That’s a pretty damn strong answer from a woman whose life has been turned upside down by the enforcement of our immigration laws against her husband — whom she stresses is not a criminal. She’s basically saying, “don’t hate the player, hate the game,” in response to questions about any anger she may want to direct at the Trump administration: Our laws say X, and it’s Trump’s job to apply and carry out those laws, so let’s fix the laws to make them more fair.  How refreshingly pragmatic and reasonable.  Kudos to her.  And even if you disagree with her support for a path to citizenship that focuses deportation efforts against criminal aliens, I’ll remind you that those views are squarely within the American mainstream, including among conservatives:

Then again, so are several key elements of Trump’s proposal, which went down in flames in the Senate (along with every “compromise” bill).  Can we at least agree that this isn’t the sort of person our laws should be targeting — even if he was technically too old to qualify for DACA (which still hasn’t been resolved)?

Jorge Garcia immigrated to the United States when he was 10. He and his wife met in Detroit and started working on ways to get him legal status in 2005. Cindy Garcia, a retired autoworker, said the first lawyer they hired botched the paperwork, sending him into deportation proceedings. For 13 years, her husband checked in regularly with Immigration and Customs Enforcement officials, she said, never leaving their town without permission…All the while, he paid his taxes and stayed out of trouble, his wife said. He appears to have no criminal record in the United States. His wife and children are all American citizens.

You can be a relatively strong immigration and border hawk and still conclude that our federal resources aren’t put to effective use by kicking out people like Mr. Garcia, and that a more rational system would help avoid situations like this. I’ll stop short of calling his plight an injustice, because the law is being followed, but this example is certainly a poster child for our dysfunctional status quo.