As We Celebrate Our Nation’s Birthday, Let’s Not Forget That Democrats Are Not Very Proud To Be Americans 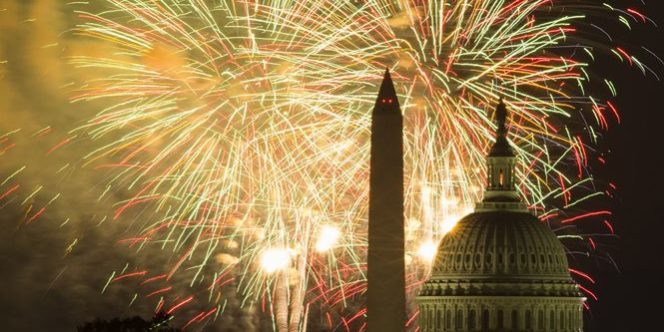 Today is the Fourth of July. It’s Independence Day. It’s America’s birthday and we’ve hit a record low concerning citizens who are proud to be Americans. Are you kidding me? What is it? Is it because Hillary Clinton lost the 2016 election?

Make up your own conclusions on that point, but polling found that liberals and Democrats are not patriotic. It also noted that this trend didn’t start because of Trump. It predated it, which doesn’t make this news any better.  Gallup found that only 32 percent of Democrats said they’re extremely proud to be Americans. Regarding self-identified liberals, that figure is even lower at 23 percent. Is everyone who follows this political philosophy on crack?

This Fourth of July marks a low point in U.S. patriotism. For the first time in Gallup’s 18-year history asking U.S. adults how proud they are to be Americans, fewer than a majority say they are “extremely proud.” Currently, 47% describe themselves this way, down from 51% in 2017 and well below the peak of 70% in 2003.

Political liberals are even less likely than Democrats to say they are extremely proud — just 23% do so, compared with 46% of moderates and 65% of conservatives.Extreme pride among liberals has dropped nine points in the past year and 28 points since 2013.

The economy is booming. Wages have grown. Unemployment has hit an 18-year low, black unemployment has reached historic lows. Three million workers have received bonuses from over 250 companies thanks to the new tax reform package. Three million jobs have been created. There are now more jobs than those seeking them. The second quarter economic growth projection is set to be around 3.6-4.8 percent. Yeah, it really, really sucks to be an American.

On the other hand, Republicans and conservatives have their heads on straight here; they’re proud Americans. Hey, why are you making this an issue, Matt? Because the Left always moans and whines about every stupid thing that normal people don’t care about, but we’re looped into their maelstrom of insanity because lucky for them—they control great projectors of cultural power through Hollywood, television, etc. that force us to indulge in their freak show. Whether it be about a certain book in a school that the Left finds offensive, or a Halloween costume that sent some progressive into a tailspin, or saying “I believe the most qualified person should get the job,” they subject us to their insanity. We sit through the pseudo-intellectual lectures about how a movie, a television show, or some piece of art is part of a so-called neo-colonial constructs of white privilege or something. No one cares.

So, yeah—on America’s birthday, I will say to Democrats and liberals, you suck and you’re not patriotic because that’s a fact. Your obsession with finding everything wrong about America has turned you into the biggest socialist eeyores on the planet; a mindless, insufferable legion of social justice warriors wallowing in misery they’ve created.  I will drink a beer, enjoy some BBQ, watch some fireworks, and wish my country a happy Independence Day. This is a great country. It’s certainly given me a great life, a better life. I will always be thankful for the Korea War veterans, who stopped the spread of communism on the peninsula. Their actions have allowed countless generations of Koreans to live in freedom. For some, like myself, it allowed us to be adopted into loving families in America and become citizens of this country. This is my home. So, here’s to America, not being miserable, not being a liberal Democrat, and to more GOP wins in the upcoming elections.