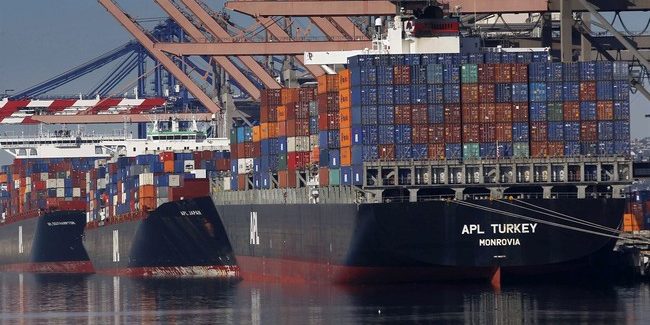 President Biden, apparently not one to be deterred from making unqualified nominations, announced Rear Admiral Ann Philips (Ret.) as his nominee to lead the Maritime Administration — “the [Department of Transportation] agency responsible for America’s waterborne transportation system” — a decision that’s now being blasted by those in the shipping industry.

Normally, the MARAD post is filled and the administration run without much notice from the public. But normally there’s not an unprecedented supply chain shortage going on that has turned some of America’s busiest ports — namely the twin ports of Long Beach and Los Angeles — into floating parking lots. The “world’s top-visited maritime and offshore industry news website” — gCaptain — noted that “The appointment of Rear Admiral Ann Phillips comes as the shipping crisis dominates the world media headlines.” And while President Biden has taken “strong action” to address the shipping crisis, “each action however has been a misstep.”

No kidding. And now that we’re seeing the impact of another Biden crisis, he’s doubling down on the bad decisions by appointing “a highly capable and impressive leader to run MARAD but one with zero industry experience.”

To the untrained eye the 139 ships waiting to leave Los Angeles may look like a port crisis that can be solved by a US Port Envoy, it is not. It is a SHIPPING crisis. Numerous ports around the United States including Oakland and San Diego, have extra capacity, what we don’t have is anyone with recent SHIPPING experience at MARAD directing the SHIPS to empty ports. This week Biden addressed the nation with a plan to prevent containergeddon from ruining Christmas but experts say his plan is doomed to fail because, again, not a single ship captain was called to give advice on how to fix this SHIPPING crisis.

Philips’ selection to head MARAD is thanks to another Biden personnel misstep: none other than Pete Buttigieg, who runs — when he’s not on paternity leave — the Department of Transportation under which MARAD falls.

Philips has been focused more on climate change than shipping logistics in her career, making her a perfect fit for the Biden administration but woefully ill-prepared to run the Maritime Administration during a supply chain crisis. According to Philips’ biography, she previously chaired “the Infrastructure Working Group for the Hampton Roads Sea Level Rise Preparedness and Resilience Intergovernmental Pilot Planning Project convened by Old Dominion University.”

The White House’s announcement of Philips’ nomination is more of the woke nonsense that’s typified the Biden administration’s priorities — much ado about equity and future climate terror — without any sort of information about why she’s qualified to handle shipping issues:

Ann Phillips is a leader in the field of coastal resilience and climate impact on national security at the regional, national and international level. In her current appointment as the first Special Assistant to the Governor of Virginia for Coastal Adaptation and Protection, she is building a collaborative, whole of government and community approach to address the impact of coastal flooding across the Commonwealth, including the development of Virginia’s first Coastal Resilience Master Plan.  In particular, she coordinates across Federal, State, local and other partners to create equitable strategies to address rising waters and climate impact to federal, maritime, and other critical coastal infrastructure assets in Virginia.