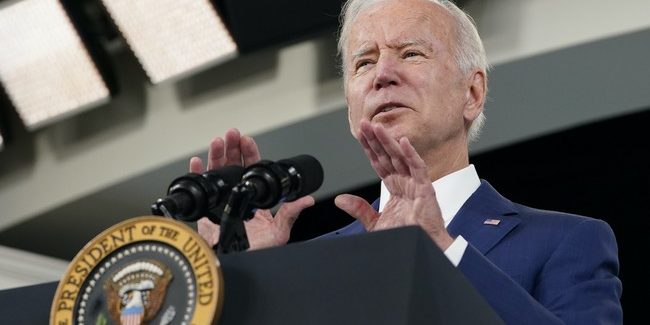 We all know the border is a mess. Our own Julio Rosas has been to the southern border multiple times to document the chaos. The Biden administration swore the adults were back, and that competency would return. Neither has happened. The adults are idiots, and this has to be one of the most incompetent administrations since Jimmy Carter. Everyone told Biden that rescinding Trump immigration policies too quickly would cause a crisis. He refused to listen because Biden has an ego the size of Delaware. Where he got that is a mystery since the man has accomplished little and is mostly known as a moron in most circles. Even Obama was not so keen on Joe running in 2020. Now we know why. Of all the crises engulfing this White House, this one was avoidable. Biden just decided to create a new one because a) he is a legitimate moron, and b) he wanted to show the Democratic base he wasn’t Trump. Well, Trump had it right on the border and nothing says failure than scurrying around a bunch of illegals in the dead of night to avoid the press. For weeks, the Biden administration has been transporting illegal minors in the dead of night, but The New York Post did some digging around. Here’s what they found about Biden’s secret illegal alien flights:

Planeloads of underage migrants are being flown secretly into suburban New York in an effort by President Biden’s administration to quietly resettle them across the region, The Post has learned.

The charter flights originate in Texas, where the ongoing border crisis has overwhelmed local immigration officials, and have been underway since at least August, according to sources familiar with the matter.

Last week, The Post saw two planes land at the Westchester County Airport, where most of the passengers who got off appeared to be children and teens, with a small portion appearing to be men in their 20s.

Westchester County cops stood by as the passengers — whose flights arrived at 10:49 p.m. Wednesday and 9:52 p.m. Friday — got off and piled into buses.

Some of them were later seen meeting up with relatives or sponsors in New Jersey, or being dropped off at a residential facility on Long Island.

A Post analysis of online flight-tracking data suggests that around 2,000 migrants nabbed after sneaking into the US from Mexico have arrived at the airport outside White Plains on 21 flights since Aug. 8.

The clandestine nature of the operation raises questions about how the White House is dealing with surge in unaccompanied minors.

The most recent figures from US Customs and Border Protection show that just during July and August,  37,805 unaccompanied minors were caught entering the US from Mexico — sometimes after being abandoned  by professional  smugglers known as “coyotes.”

Later Saturday, a similar scene began playing out in Jacksonville, Fla., where many of the flights from Texas have touched down before continuing on to Westchester — and where The Post saw a Boeing 737-700 land shortly after 10 p.m. at Jacksonville International Airport.

Republican Florida Gov. Ron DeSantis expressed outrage at The Post’s findings, with a spokeswoman saying: “If the Biden Administration is so confident that their open-border policy is good for our country, why the secrecy?”

The Post tracked the flights originating in Texas, a stopover in Florida, and finally arriving in New York. And yes, folks near some of these airports have been awakened at early in the morning due to these flights for over a month. This is open borders policy, folks. It’s unpopular, hence why this is being done under the cover of darkness. The simple thing to do is to redirect these flights back to these illegals’ home countries. Deport them. They shouldn’t be here, but that’s not what Democrats do. They open the floodgates and resettle them. It’s lawlessness. This was probably the plan all along. What was not expected was the sheer mass of people, which has led to kids back in cages, concentration camps, and other throwbacks to the supposedly fascistic Trump days. Send them home, Joe. That’s what you should do, but you won’t. You probably don’t know what’s going on, just like in Afghanistan, just like with your jobs plan, just like with spiking inflation, or the global supply chain crisis. You don’t know because you cannot do the job. You’re mentally too slow. You’re inept. And you cannot do this from the basement. Also, you need to answer questions. Yes, they won’t be friendly because you’ve been sucking for months and it’s going to get worse now that you’ve taken the hammer to natural gas. Heating bills are expected to spike anywhere from 30-50 percent in some parts of the country. Way to freeze out not just working-class families, but fixed-income seniors. Just wait until those heating bills pile up and the rancor increases. I’m sure Joe will hide because that’s what cowards do.