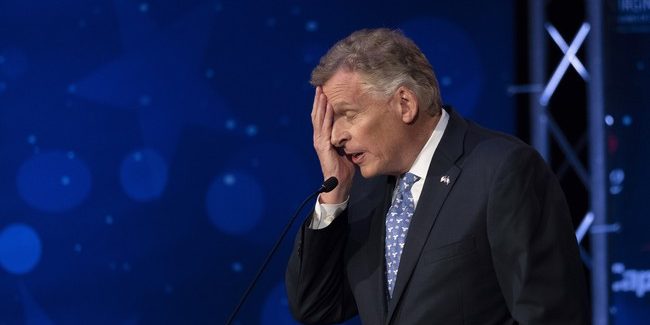 Former Georgia gubernatorial candidate Stacey Abrams was in Virginia yet again on Sunday to campaign for Terry McAuliffe, who is looking to be the commonwealth’s Democratic governor once more. On Sunday, as Tyler O’Neil with Fox News reported, McAuliffe propagated Abrams’ own “Big Lie” with regards to that Georgia gubernatorial race.

O’Neil pointed out that McAuliffe also nodded along last Sunday when Abrams said while campaigning for McAuliffe that “I come from a state where I was not entitled to become the governor.”

Abrams’ 2018 gubernatorial campaign website is still up and running, where, as O’Neil highlighted, refers to the failed candidate as “Governor.”

That McAuliffe would propagate Abrams’ “Big Lie” is hardly surprising, considering that he has engaged in election denial in his own right. As we have covered many times at Townhall, including Guy, who just did a story last week, McAuliffe has repeatedly cast doubt that George W. Bush was legitimately elected president in 2000. McAuliffe became the new chair of the DNC on February 3, 2001, not long after Bush was inaugurated.

Even more rich is that McAuliffe accuses his Republican opponent, Glenn Youngkin, of denying the results of the 2020 presidential election. Youngkin has affirmed multiple times, including during an interview on The Guy Benson Show, that President Joe Biden is the legitimate president.

McAuliffe appears to take his evidence from Youngkin’s commitment to election integrity.

These latest Sunday claims from McAuliffe come after RealClearPolitics (RCP) published a piece by Georgia’s Secretary of State Brad Raffensperger on Wednesday warning about “The Danger of the McAuliffe-Abrams Stolen Election Claims” and in his opening paragraph wrote h “felt it important to speak up.”

As he wrote in his piece:

Virginia deserves better. By inviting Stacey Abrams, who has yet to concede her 2018 gubernatorial election race, to campaign for him, McAuliffe is demonstrating that he cannot be trusted to defend Virginia’s elections, a concerning development that should worry every voter in that state.

Since November 2018, Abrams has alleged repeatedly that her election was “stolen.” She filed a lawsuit against Georgia’s elections officials that continues to this day, though a federal judge appointed by President Obama has thrown out the most headline-generating allegations. She has raised millions of dollars off of her stolen election claims and has since built a national profile based on lies about the integrity of Georgia’s elections. She has referred to Republicans as domestic enemies.

In Virginia, Abrams demonstrated that she still has no interest in conceding her 2018 race. During a campaign stop, she told the crowd, “Just because you win doesn’t mean you won.” Not only did Abrams not win her Georgia election but she lost by 55,000 votes, more than four times President Trump’s November 2020 deficit.

Raffensperger also wrote that “McAuliffe’s stolen election claims should be disqualifying” and that “Democracy cannot survive if leaders like McAuliffe push these claims on the national stage and give a platform for Abrams to do so as well.”