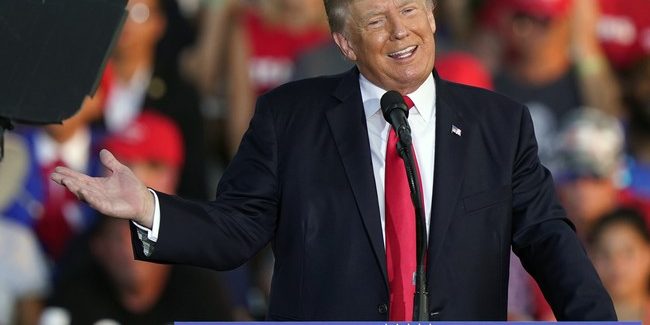 Former President Donald Trump is now the current betting favorite to win back his old job in 2024, according to at least one major betting aggregator.

US-Bookies.com, a political betting aggregator website, has Trump in the lead for the first time since President Joe Biden assumed office in January (via press release).

“In recent months, the 2024 election betting markets saw Kamala Harris and Joe Biden trading places as the favorite, but Trump’s recent surge puts him atop the list,” says a US-Bookies spokesperson. “At the same time, Biden failed to notice any changes to his odds, while Kamala’s have worsened.”

The website also has Republicans as the odds-on favorites to win back majority control of both the House and the Senate in November 2022.

While Trump has yet to make an official announcement, he has been out and about giving speeches and making media appearances criticizing the failed policies of the Biden administration. Meanwhile, Biden’s approval rating continues to sink to new lows as Americans become increasingly concerned about a lagging economy, inflation, rising fuel prices, an open border, Covid vaccine mandates, and other issues.