Biden’s Closing Argument: Look Jack, Our Policies Are Working, and Voters Want More of Them 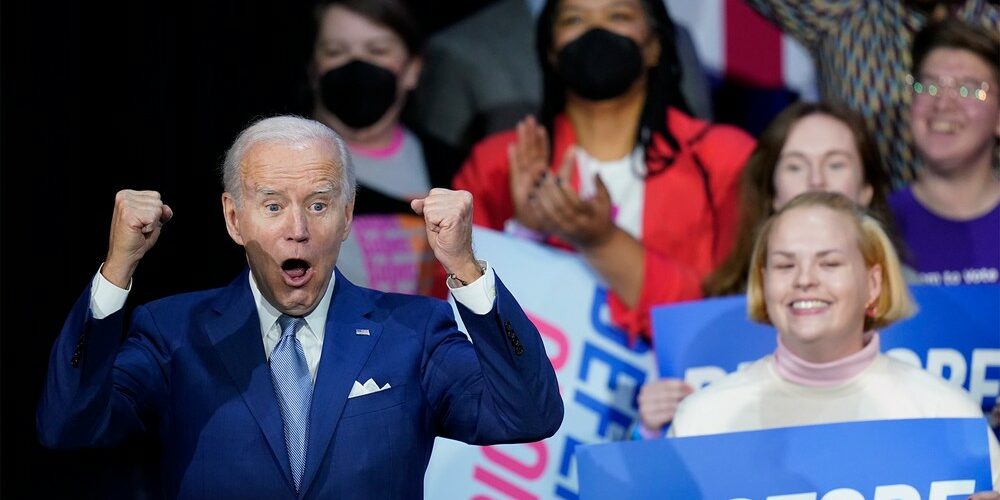 Good Election Day morning.  Today is the day.  Tens of millions of Americans have voted early in this midterm cycle — including record-smashing numbers in a crucial state where Democrats have lied incessantly about racist ‘voter suppression’ — but today is the nationwide make-or-break event.  If Republicans are to win the types of victories they ought to be capable of achieving under the current political circumstances, their voters will need to show up in force.  Early vote ‘blue walls’ will only be breached by overwhelming red turnout today.  Independents and late-deciders will need to break strongly for the opposition party, too.  Democrats have spent the final stretch of this election season arguing that democracy itself could die if voters cast ballots for the ‘wrong’ party in a free and open election.  Of course, many of the candidates Democrats call most dangerous were actively boosted by the Democrats in GOP primaries, which exposes their hand-wringing as the cynical charade that it is.  They may have convinced themselves that their hysterical warnings are warranted.  I suspect most people would see a clip like this, featuring a senior Democratic leader, and roll their eyes:

That’s the man who recently admitted his whole party knew their nearly $2 trillion partisan spending binge would fuel inflation, then did it anyway.  Here he was having a normal one, showing up on a Sunday news program in a Hawaiian shirt to drop casual Nazi comparisons.  Desperation takes many forms.  Their flop sweat may have worsened as they read this warning on ‘extremism’ from their own coalition:

New memo from centrist Dem think tank Third Way: “Despite a roster of GOP candidates who are extreme by any standard, voters see Democrats as just as extreme, as well as far less concerned about the issues that most worry them.” (Via @axios) https://t.co/DaSA8WOCOx

Third Way — a center-left think tank backed by some of the biggest names in Democratic politics — is sounding the alarm about deep-seated party flaws, based on its own new polling from Senate battlegrounds…Lifelong, respected Democrats are saying the quiet part out loud — that if Republicans have a huge night on Tuesday, as polls are blaring, Democrats must blame “much deeper” problems than simply the “historical trends” that beset the party in power…James Carville, Ruy Teixeira and other Dems have been making this case for more than a year, seizing initially on the embrace of “defund the police” by some progressives…“Democrats are underwater on issues voters name as their highest priorities, including the economy, immigration, and crime.”  “[V]oters question whether the party shares essential values like patriotism and the importance of hard work. … Only 43% of voters say Democrats value hard work, compared to 58% for Republicans.”… “Democrats are benefitting from a perception among voters that Republicans are extreme, but they cannot fully reap the gains of this view, as voters think Democrats are extreme as well.” The bottom line: Democrats need to make major changes to the party brand to avoid another potential wipeout in 2024.

Democrats are perceived as out-of-touch and extreme because they are out-of-touch and extreme. The soft-on-crime, ‘defund the police’ element has been indulged and coddled, if not promoted, within their party. They want the government to spend even more, and take over the healthcare system, making tens of millions of Americans’ plans illegal. They deny the crisis they’ve inflamed to historic levels at the Southern border. Their allies loudly demand the plain meaning of words like “woman” be altered to fit a sexual/gender identity revolution, including for children. They support unlimited elective abortion-on-demand, throughout all nine months of pregnancy, funded by taxpayers. We could go on and on. Republicans are vulnerable to any number of criticisms, several of which are self-inflicted, but their weaknesses have been largely neutralized, or even overwhelmed by, richly-earned negative perceptions of the Democrats.  Even on ‘protecting democracy,’ the two parties are virtually tied, after all the screeching from Democrats.  People are running away from the party in power.  And as voters flock to the polls today, the leader of that party evidently wants them to hear a message, loud and clear: You’re welcome, America.

Never mind that this is obviously untrue; it’s also Democrats’ worst-performing messaging, according to a top party pollster, who says this sort of thing actively alienates voters.  The president keeps going there anyway, while also saying things like this (with subsequent clean-ups from staff becoming less and less persuasive), saying the quiet part out loud:

Nearly every single Democrat in Congress has supported every single major element of the Biden/Schumer/Pelosi agenda over the past nearly two years.  There is no meaningful policy daylight between Biden and 99 percent of Congressional Democrats, as they’ve demonstrated repeatedly.  The president insists that it’s working well, that voters want more of it, and that the economy is “strong as hell.”  That’s his closing message, while adding further comments about crippling America’s energy sector.  He is effectively asking the American people to render a referendum-style judgment on the results of total Democratic control of Washington today.  I say they should do precisely that: