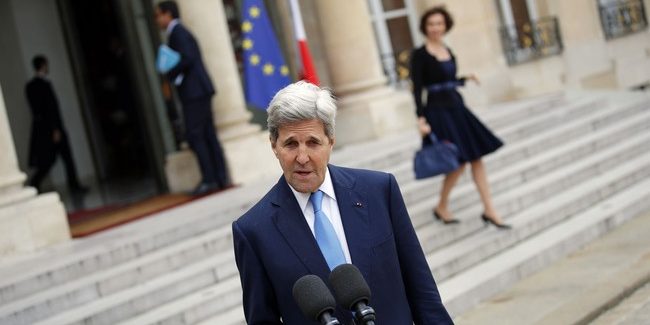 Biden administration climate czar John Kerry, also a former Secretary of State in the Obama administration, is under fire for allegedly leaking information about Israel to the Iranian Foreign Minister.

Kerry denies these claims, and the White House is not commenting, but Republican lawmakers are calling for an investigation. Some are also calling for Kerry to resign if the allegations are proven to be true.

Two House Republicans, Elise Stefanik (R-NY) and Jim Banks (R-IL), called on Kerry to be removed even before the results of any probe.

“This is a criminal act and John Kerry must be immediately investigated and PROSECUTED,” Stefanik wrote on Twitter. “President Biden must immediately remove John Kerry from any government or advisory position.” Banks told Washington Free Beacon that Kerry should resign “immediately” and that the investigation should be “retrospective.”

“Secretary Kerry, can you please explain to the American people why you disclosed information about Israeli operations to Iranian FM @JZarif? We’ve known for years you were helping him. Americans deserve to know why,” Pompeo wrote on Twitter.

Haley demanded that both Kerry and Biden explain themselves for “tipping off Iran” and stabbing Israel in the back.

“This is disgusting on many levels. Biden and Kerry have to answer for why Kerry would be tipping off Iran, the number one sponsor of terror, while stabbing one of our greatest partners, Israel, in the back,” Haley wrote on Twitter. The White House and State Department both refused to shed light on the claims thus far.