Democrats Schiff and Swalwell Get Formally Blocked From Intelligence Committee 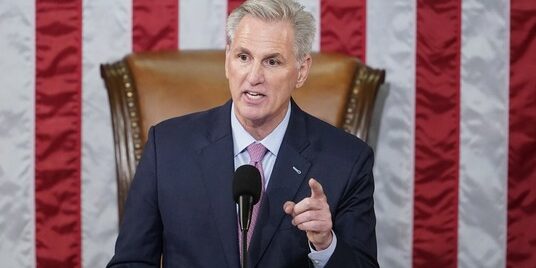 On Tuesday night, just as he has promised for months he would do, Speaker Kevin McCarthy (R-CA) formally blocked Reps. Adam Schiff (D-CA) and Eric Swalwell (D-CA) from the House Intelligence Committee. Despite McCarthy repeatedly warning he would take such action, House Minority Leader Hakeem Jeffries (D-NY) on Monday nominated the embattled Democratic members to the committee, as they had requested.

McCarthy tweeted out the letter he sent to Jeffries. While his letter did acknowledge “I appreciate the loyalty you have to your Democratic colleagues, and I acknowledge your efforts to have two Members of Congress reinstated to the House Permanent Select Committee on Intelligence,” McCarthy nevertheless reminds Jeffries that allowing Schiff and Swalwell to serve on the committee is something he cannot do.

“But I cannot put partisan loyalty ahead of national security, and I cannot simply recognize years of serve as the sole criteria for membership on this essential committee. Integrity matters more,” the letter continued with original emphasis.  As Punchbowl News mentioned in its Monday morning newsletter sharing Jeffries’ letter about the committees, Schiff is one of the longest-serving members during its 45-year history. He has served as the committee’s chairman and was looking to be its ranking member.

Towards the closing of his letter, McCarthy also warns of his assessment “that the misuse of this panel during the 116th and 117th Congresses severely undermined the primary national security and oversight missions–ultimately leaving our nation less safe.” McCarthy closes by mentioning his commitment to “returning the Intelligence Committee to one of genuine honesty and credibility that regains theorist of the American people.”

McCarthy has not only warned for some time that he would not allow Schiff and Swalwell to serve on the committee, but has given cause. The speaker has listed concerns with an FBI briefing when it comes to Swalwell serving on such a committee, due to his ties to Chinese spy Fang Fang, and how Schiff lied to and misled the American people on the Ukrainian whistleblow and the “Russia collusion” hoax.

“What did Adam Schiff do as the chairman of the Intel Committee,” McCarthy laid out for reporters before going off with a whole list of offenses. “What Adam Schiff did, use his power as the chairman, and lie to the American public–even the Inspector General said it–when [former Rep.] Devin Nunes put out a memo, he said it was false, when we had a laptop he used it before an election to bring politics and say that it was false and say that it was the Russians, when he knew different, when he knew the Intel.”

McCarthy also referenced, as he has multiple times in the past, the Ukrainian whistleblower. “When a whistleblower came forward, he said he did not know the individual, even though his staff had met with them and set it up.”

“So no, he does not have a right to sit on that [committee].” Seeking to distinguish himself from Democrats, who when they controlled the 117th Congress, removed Reps. Paul Gosar (R-AZ) and Marjorie Taylor Greene (R-GA) from all of their committee assignments, McCarthy offered “so yes, he can serve on a committee, but he will not serve on Intel, ’cause it goes to the national security of America, and I will always put them first, all right?”

McCarthy has also mentioned a commitment to ensuring Rep. Ilhan Omar (D-MN) does not serve on the the House Foreign Affairs Committee, due to her antisemitism, which her Democratic colleagues have largely downplayed.

Pergram later tweeted out more reactions, which came off exactly as you would expect from the three members, who threw out all sorts of charges.

In addition to retweeting the tweet above from Schiff, Swalwell also tweeted his complaints, while bringing up a hyper partisan so-called fact-check from The Washington Post’s Glenn Kessler and warning “I’m not going away.”

In the case of Omar’s assignment though, the House will need to vote on barring her from serving on the committee. Pergram also tweeted out that it is “Unclear if McCarthy would have the votes” to do so.

McCarthy appears to have at least a few defections there. As highlighted by The Hill’s Mychael Schnell, Rep. Victoria Spartz (R-IN) released a statement earlier on Tuesday indicating she opposes denying Democratic members their committee assignments. “Two wrongs do not make a right,” she began her statement by saying, also later making clear Speaker McCarthy needs to stop “bread and circuses” in Congress and start governing for a change.”