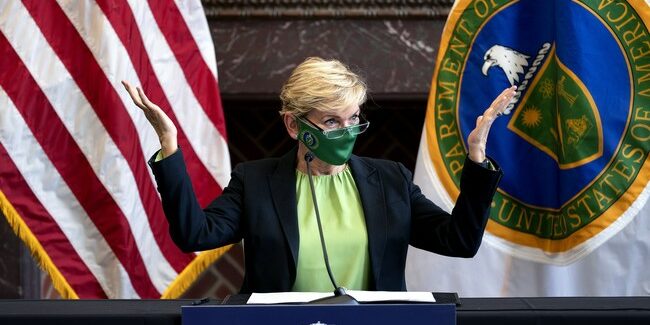 At the end of 2021, the Biden administration released its energy outlook forecast for 2022, and their predictions show just how little they understand about American energy and how utterly unprepared they were for the energy crisis Biden was creating.

The U.S. Energy Information Administration — under the Department of Energy led by Secretary Jennifer Granholm — releases “short-term energy outlook” reports each month to provide information on liquid fuels and forecast their future trends. Their report issued December 7, 2021 — archived here — notes that the forecast “remains subject to heightened levels of uncertainty related to the ongoing recovery from the COVID-19 pandemic” but proceeded to estimate that “U.S. GDP will grow by 5.5% in 2021 and by 4.4% in 2022.”

And here’s what the Biden administration predicted for gasoline in 2022, just six months ago:

U.S. regular gasoline retail prices averaged $3.39 per gallon (gal) in November, a 10 cents/gal increase from October and $1.29/gal higher than in November 2020. The November monthly average was the highest since September 2014. We forecast that retail gasoline prices will average $3.13/gal in December before falling to $3.01/gal in January and $2.88/gal on average in 2022.

By January 1, gas prices were already $3.286 per gallon — breaking the Energy Department estimate from the start — and they increased to $3.386 per gallon by January 31. Prices have only continued to rise since then, more than doubling from their level when Biden took office and surpassing the $5 mark to reach $5.014 as of Monday. But the Biden administration thought and released its absurd projection that gas prices this year would average just $2.88.

In subsequent short-term energy outlooks, even as gas prices continued so soar, the Energy Department continued to keep its head buried in the sand and pretend prices would go and stay low.

In April, they predicted “U.S. prices for retail gasoline will average $3.84 per gallon (gal) this summer (April–September).

Whether they really thought in December that gas prices would drop in 2022 and remain below $3 on average or not, the official position and repeated low estimates from the Biden administration shows how and why they have been unable and/or unwilling to address the issue. It’s a crisis they — apparently officially — didn’t see coming. They’ve been, per their own estimates, behind the ball every step of the way as Biden’s inflation and energy crises spiraled out of control. And what has the Biden administration done? Secretary Granholm’s reaction here says it all: