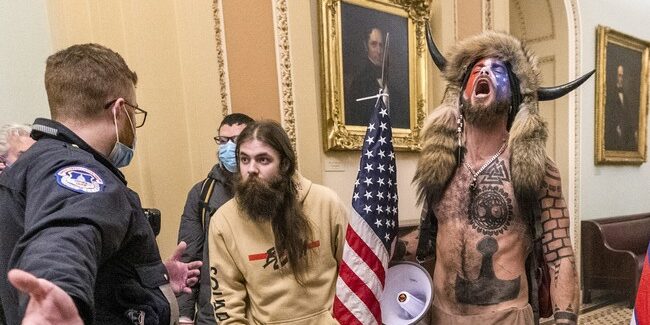 As a die-hard New York Giants fan, I hate the Redskins. Yes, they’re the Washington Redskins; I refuse to accept their new politically correct term. Yet, defensive coordinator Jack Del Rio’s take on the January 6 riot is pretty much how everyone who isn’t a frothing progressive feels about the event. It’s based. It’s sure to infuriate the liberal media, so you know it’s the correct opinion. He called the riot a “dust-up” compared to the summer-long wave of rioting, looting, and arson that we saw in 2020. He’s not wrong (via WaPo):

In a post-practice meeting with reporters, Washington Commanders defensive coordinator Jack Del Rio minimized the Jan. 6 storming of the U.S. Capitol building by calling it a “dust-up” in comparison to the racial justice protests that followed George Floyd’s death in 2020.

“I can look at images on the TV [of the Floyd protests] — people’s livelihoods are being destroyed. Businesses are being burned down. No problem,” he said. “And then we have a dust-up at the Capitol, nothing burned down, and we’re going to make that a major deal. I just think it’s kind of two standards, and if we apply the same standard and we’re going to be reasonable with each other, let’s have a discussion. That’s all it was [on Twitter]. Let’s have a discussion. We’re Americans.”

Del Rio, 59, has been outspoken on Twitter in each of the three offseasons he’s been a Commanders coach, often on conservative political issues.

“Anything that I ever say or write, I’d be comfortable saying or writing in front of everybody that I work with, players and coaches,” Del Rio told reporters Wednesday. “I express myself as an American; we have that ability. I love this country, and I believe what I believe, and I’ve said what I want to say. Every now and then, there’s some people that get offended by it.”

If this becomes a locker room issue, the Redskins are distracted by the wrong things. They should only care about winning games and clinching the division. That’s the goal of every team, no matter what the situation. Work hard, compete, and try to win. You guys have no time to worry about Coach Del Rio’s tweets or any political issue for that matter. This is truly a nothingburger because everyone outside the Acela Corridor agrees with Coach Jack. The liberal media is trying to make January 6 Pearl Harbor on steroids. It wasn’t. It never will be. It wasn’t an insurrection, and more damage was caused by leftists rioting in 2020 than this little riot.

UPDATE: They got to him. Del Rio issued an apology. Not shocking, but what a bunch of snowflakes (via ESPN):

“I made comments earlier today in referencing the attack that took place on the United States Capitol on January 6, 2021. Referencing that situation as a dust-up was irresponsible and negligent and I am sorry,” Del Rio said in a statement posted on Twitter. “I stand by my comments condemning violence in communities across the country. I say that while also expressing my support as an American citizen for peaceful protest in our country. I have fully supported all peaceful protests in America.