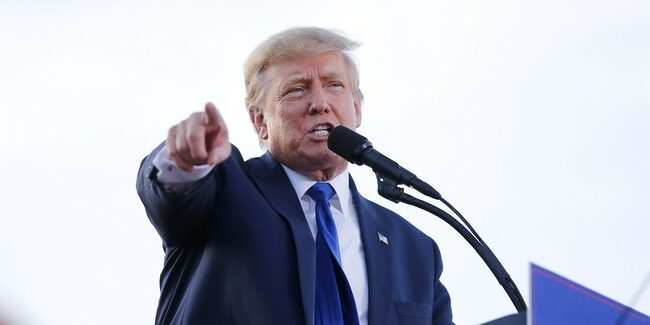 Former President Donald Trump released a 12-page statement this week in response to the January 6 hearing taking place this week.

In his statement, Trump wrote that Democrats are unable to offer solutions to a slew of issues facing the country at the moment, including the border crisis. He added that Democrats seem to think that Americans are “stupid” and will not move on from Jan. 6, which happened in January 2021. He called the committee investigation the Capitol riots on Jan. 6 a “kangaroo court.”

Millions and millions of illegals are marching to the border and invading our country. We have a White House in shambles, with Democrats, just this week, declaring that Biden is unfit to run for reelection. And what is the Democrat Congress focused on? A Kangaroo Court, hoping to distract the American people from the great pain they are experiencing.

Seventeen months after the events of January 6th, Democrats are unable to offer solutions. They are desperate to change the narrative of a failing nation, without even making mention of the havoc and death caused by the Radical Left just months earlier. Make no mistake, they control the government. They own this disaster. They are hoping that these hearings will somehow alter their failing prospects.

Trump delved into the 2020 election, claiming there were voter “mules” in several states, including Georgia, Michigan and Arizona. He cited the documentary “2000 Mules” from True the Vote’s Catherine Engelbrecht and Gregg Philips and conservative political commentator Dinesh D’Souza.

The illegal ballot harvesting operation is an insult to the democratic process, but the kicker is the media feeding us the bogus line that this was the most secure election in U.S. history. What a load of bologna! The data shows us how compromised the system was. The math shows us that it changed the outcome of the Election.

Looking at just the known traffickers Engelbrecht and Phillips identified, the 2000 mules, we know they averaged 38 drop box visits averaging five ballots per box.13 That totals 380,000 illegal ballots inserted into the Election via the drop boxes. We also know they targeted specific counties in order to impact the outcome of the Election. Many of those counties were separated by only a few thousand votes.

Zuckerberg funneled his money through the Center for Tech and Civic Life (CTCL), a liberal nonprofit based in Illinois, which received the lion’s share of the money, at least $350 million.43 CTCL is a radical leftist organization filled with Obama Foundation fellows and Obama appointees.44 Almost all of the money went to Democrat-run and controlled areas. Very little, for cosmetic purposes only, went to Republican areas. They threw us a bone.

Wrapping up, Trump pointed out that the midterm elections are around the corner and that the Democrats are likely to lose power. He mentioned that baby formula is scarce, gas prices have skyrocketed, and liberal educators are indoctrinating children in schools.

The Establishment is holding on as tightly as they can to their power as they watch it slip from their grasp. Our country is in a nosedive. Americans are struggling to fill their gas tanks, feed their babies, educate their children, hire employees, order supplies, protect our border from invasion, and a host of other tragedies that are 100% caused by Democrats who obtained power through a rigged election, and the people of our country are both angry and sad.

Americans have very real pressing concerns about the basic necessities of life. What is Congress doing about it? They’re doing everything they can to ignore and distract from the very real pain that they have caused this country. They want to talk about anything but the 2020 Election results and the fact that they are the cause of our country’s problems.

Trump released the lengthy statement through his Save America PAC and urged his supporters to “save America” when they head to the polls in November.

Townhall covered today how the Jan. 6 select committee is already postponing their hearing scheduled for Wednesday. The committee’s Thursday hearing is still supposed to take place.