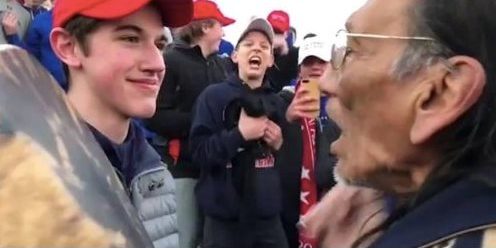 Nick Sandmann, a junior at Covington Catholic High School, said he was “mortified that so many people have come to believe something that did not happen — that students from my school were chanting or acting in a racist fashion toward African Americans or Native Americans. I did not do that, do not have hateful feelings in my heart and did not witness any of my classmates doing that.”

The students initially were accused of mocking a Native American participant in the Indigenous Peoples March, which coincided with the March for Life. A snippet of video from the apparent confrontation quickly gained traction on social media, with many condemning the students — some of whom were wearing “Make America Great Again” apparel — and some calling for them to be identified and harassed. The Roman Catholic Diocese of Covington and the high school issued a joint statement apologizing to the activist, identified as Nathan Phillips Saturday.

owever, the emergence of longer video that appears to show some students being harassed prompted some conservatives to take back their earlier criticisms of the students. Sandmann said he and his classmates had taken part in the March for Life and had arrived at the Lincoln Memorial to meet the buses that would take them back to Kentucky.

However, Sandmann said, the students were confronted by four members of the Black Hebrew Israelite movement, who “called us ‘racists,’ ‘bigots,’ ‘white crackers,’ ‘f—-ts,’ and ‘incest kids.’ They also taunted an African-American student from my school by telling him that we would ‘harvest his organs.'” Sandmann said one of the students asked a teacher chaperoning the trip for permission to “begin our school spirit chants” to drown out the hecklers. In one chant, the group appeared to perform the haka, a traditional Maori dance. Marcus Frejo, a member of the Pawnee and Seminole tribes who witnessed the chant, said he considered it mockery. “At no time did I hear any student chant anything other than the school spirit chants,” Sandmann said. “I did not witness or hear any other students chant ‘build that wall’ or anything hateful or racist at any time. Assertions to the contrary are simply false.” At that point, Phillips came toward the group with his drum and, according to Sandmann, “locked eyes with me and approached me, coming within inches of my face” and “played his drum the entire time he was in my face.”

Sandmann said he was trying to defuse the tense situation by remaining “motionless and calm.” He also denied taunting Phillips by making faces at him, but said he smiled at the protester “because I wanted him to know I was not going to become angry, intimidated or be provoked into a larger confrontation.”

For his part, Phillips told The Associated Press Sunday that he was trying to keep the peace between the students and members of the group who were heckling them. He also insisted that the students were making disparaging remarks about Native Americans. “They were making remarks to each other … (such as) ‘In my state those Indians are nothing but a bunch of drunks.’ How do I report that?” he said. “These young people were just roughshodding through our space, like what’s been going on for 500 years here — just walking through our territories, feeling like ‘this is ours.” Frejo said he joined Phillips to defuse the tense situation, singing the anthem from the American Indian Movement with both men beating out the tempo on hand drums.

“I am being called every name in the book, including a racist, and I will not stand for this mob-like character assassination of my family’s name,” Sandmann said. ” … One person threatened to harm me at school and one person claims to live in my neighborhood. My parents are receiving death and professional threats because of the social media mob that has formed over this issue.”