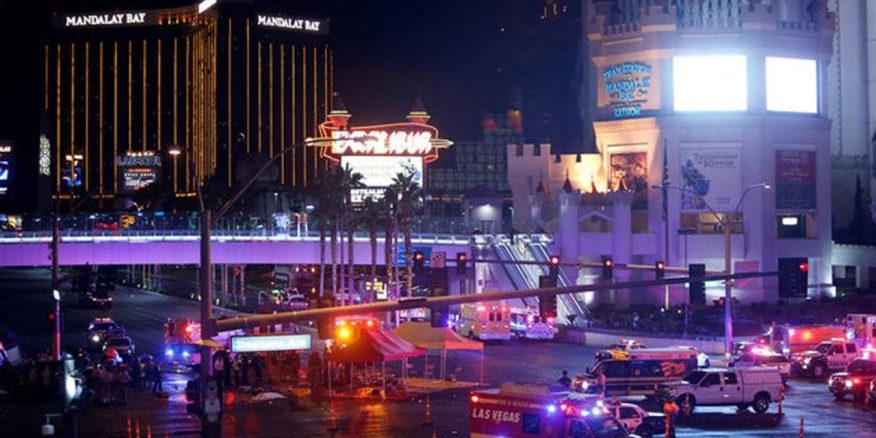 A gunman turned a Las Vegas concert into a killing field Sunday night, murdering at least 50 people and injuring more than 200 others in the deadliest mass shooting in modern United States history.

The suspect, who was killed, was identified as 64-year-old Stephen Paddock, a local resident. Authorities also said they were “confident” Paddock’s roommate, Marilou Danley, had been located. Officials previously described Danley as a person of interest.

The gunman, who fired down on the concert from a room on the 32nd floor of the Mandalay Bay Hotel and Casino, was killed by police. Authorities first received calls about an active shooting at about 10:08 p.m.

Country music star Jason Aldean was performing at the Route 91 Harvest Festival when the gunfire erupted. Aldean was performing his last song of the night. Initially, those in attendance said they thought the sound was firecrackers. But as the shots continued, Aldean stopped singing and some concertgoers could be heard yelling to each other to get down. One witness told KSVN that he heard “hundreds of shots.” The gunfire was rapid and reportedly confused with firecrackers. “It sounded like a machine gun,” one vendor told Fox News. “It sounded like more than one machine gun.” Authorities said law enforcement swarmed the hotel and killed the gunman in a room on the 32nd floor. Responding  officers used an explosive device to force the door open into the room to shoot Paddock dead, law enforcement officials told Fox News.

Some concertgoers stayed behind to offer help to those around them. “Everybody I saw breathing, I helped.” a concertgoer told Fox News. Kodiak Yazzi, 36, said the music stopped temporarily and started up again before another round of pops sent the performers ducking for cover and fleeing the stage.

As the 40,000 fans in the crowd began to flee, Yazzi took cover and said he saw flashes of light coming from the Mandalay Bay hotel tower high above.

“This was obviously well-planned, they waited for a major, open air event, and obtained a room facing it,” retired FBI special agent and former national FBI spokesman John Iannarelli, who drove past the scene of the event just moments before the shooting took place, told Fox News. “I can see the flashing blue police lights from my hotel window.”  Iannarelli added that the suspect “probably had inside help” from the girlfriend in the room, making her a “criminal accomplice.”  “They were well-trained,” Iannarelli said, noting the use of automatic weapons. “That’s not an easy task.”

Iannarelli added that the two used “expensive guns and ammunition.”  “It is too early to tell,” Iannarelli said of what their motivation could have been. “Is this a lone wolf inspired by others? This is exactly the type of attack the U.S. has been fearing would come to our shores.”  Iannarelli noted that FBI and police are going to speak with every friend and relative, and are conducting forensic review of the suspects’ computers and phones.