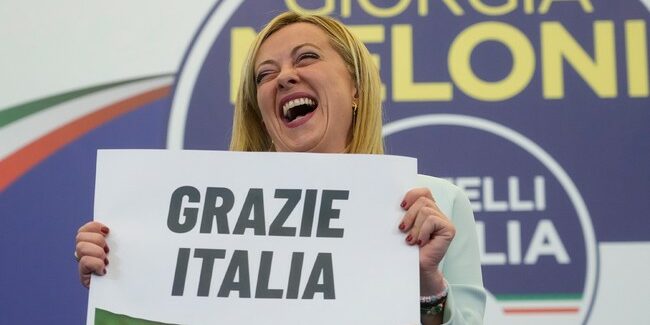 Italy has clinched a historic benchmark as they await their first female prime minister, Giorgia Meloni, the far-right candidate. Her Brothers of Italy Party scored a resounding victory in the recent general election. The right-wing bloc comes after years of political turmoil that has seen one government replaced by another within a few months. Based on reports, the pervasive political instability partially played a role in neutralizing the Italian Left’s attacks against Meloni. They tried to brand her a fascist autocrat, but 18-plus months of turnstile governments and fragile coalitions would probably make any electorate vote for someone new and unconventional.

Our friends at Newsbusters captured the liberal media going apoplectic since Meloni’s campaign was grounded on “God, country, and family.” So, of course, the Left’s mind melted into oblivion that some politicians would run on a national messaging campaign that makes total sense.

What about the fears that Italy is marching towards autocracy? Who knows, but the experts downplaying this victory note that the nation’s volatile political environment won’t lend itself to creating such a sustainable system of concentrated power. Ms. Meloni could form a lasting government, which at this point would be anything lasting more than 18 months or be relegated to the dustbin in that same period. Italy’s ties to Europe are another massive institutional obstacle that some say provides guardrails regarding fascism, even though that worry is massively and almost comically overblown.