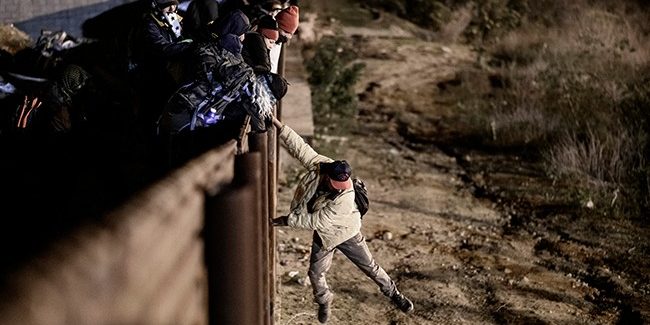 Again, even out of office, Donald Trump’s policies are winning. Sure, the Democrats fired tons of grapeshot at them. They took a beating in the media. And after all the whining and yelling, core pieces are staying, like the border wall. Walls work. If they didn’t, we wouldn’t have the fortification we see now around the Capitol Building. And right now, Joe needs something to beef up the border as hordes of migrants are determined to enter the United States. There were over 100,000 arrests of illegal aliens in February alone. The detention camps are overwhelmed and overcapacity. The kids are back in cages. And loads of them are infected with COVID. Is this a serious pandemic or not, Joe? Because you treat this virus, which has a 90+ percent survival rate, as some super Ebola but allow COVID-infected migrants to roam into our border towns. They’re spreading the disease, Mr. Biden. Oh, and they’re getting in-person learning, too, whereas American students are dealing with increasing cases of mental illness, like depression and anxiety over the lockdowns. Some have tragically committed suicide. COVID-positive Americans cannot return to their country, but COVID-infected migrants have the red carpet rolled out for them.

The camps are packed to the brim with illegal aliens, which is why the Biden administration in a move that should shock no one—barred the media from viewing these facilities. Our own Julio Rosas is at the border documenting the crisis and it is a crisis. He obtained photos of the conditions. Biden cannot ignore this forever, which is why the administration is quietly poised to restart border wall construction, though Biden’s people will frame it as an initiative to fill the “gaps” (via Washington Times):

In a conversation with ICE employees last week Mr. Mayorkas was asked about his plans for the wall and he said that while Mr. Biden has canceled the border emergency and halted Pentagon money flowing to the wall, “that leaves room to make decisions” on finishing some “gaps in the wall.”

Mr. Mayorkas, according to notes of the ICE session reviewed by The Washington Times, said Customs and Border Protection, which oversees the wall, has submitted a plan for what it wants to see happen moving forward.

So, after all the talk about how Trump had a racist and inhumane immigration policy, we have Joey Biden’s DHS chief saying he wants to fill the gaps that are present in the border wall. So, let’s see if I have this straight. The Biden administration agrees with Trump on the SALT caps for taxes, will probably keep the lion’s share of the middle-class tax cuts Trump signed into law four years ago, and now could restart border wall construction. He also signed an executive order to strengthen the “made in America” aspect of our goods. Buy American, America first—these are Trump positions.

My word—maybe Trump didn’t leave office at all! Oh, I kid—Trump wouldn’t allow someone whose mind is being eaten by worms run the show. But it once again shows that the Trump agenda was chock-full of action items that were rational, popular, and worked when applied.

Charles Barkley Drives a Dagger Through the Heart of the Left’s Identity Politics Narrative
April 5, 2021