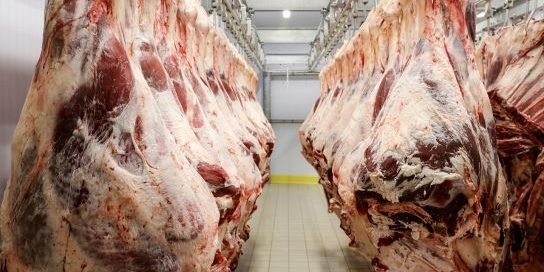 More than 2.5 billion pounds of meat are being stockpiled in warehouses across the U.S. as trade disputes slow sales overseas, according to a Wall Street Journal report.

Federal data confirming the numbers are expected on Monday. The Journal reports that despite an increased appetite from Americans for meat in recent years, production of beef, pork, poultry and turkey have hit record highs, leaving the U.S. meat industry increasingly reliant on exports, which has suffered in recent months over tariff disputes. However, the good news is that extra meat may bring down prices for U.S. consumers and retailers. Mexico and China – two of the largest foreign buyers of U.S. meat – have imposed tariffs on U.S. pork products in response to President Trump’s tariffs on U.S. steel, aluminum and other goods.

An industry official told the outlet that hams, chops and livers, specifically, have become more expensive in those markets, which is causing some of the stockpiles to rise. However, chicken has largely been unaffected by these tariffs. A spokesperson for the National Chicken Council told FOX Business that it does not ship to China, and that Mexico still remains its No. 1 market.

While large pork processers such as Smithfield Foods and JBS SA did not immediately respond to FOX Business’ request for comment, Tyson Foods said the “availability of market-ready hog supplies is seasonally smaller in the summer and larger in the fall.”

“Our pork production this summer has matched available pig supplies, with our plants operating five days a week and minimal reductions in hours. We expect to start adding some Saturday shifts as we approach fall,” Gary Mickelson, a Tyson Foods spokesperson said.

“Despite the tariffs by some countries, we’re still exporting pork. It appears one of the primary reasons cold storage supplies have increased in recent years is because of record U.S. protein production and subsequent increases in export volumes across proteins,” he added.

Shares of Tyson Foods, however, fell slightly on Monday following the report.