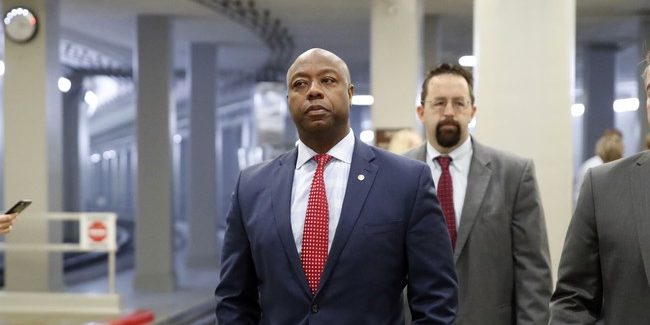 During the GOP response to President Joe Biden’s Joint Session of Congress speech Wednesday night, Republican Senator Tim Scott said that while he has experienced individual cases of racism, America as a whole is not a racist country. Further, he advocated for redemption, not permanent punishment for the original sin of slavery.

“A hundred years ago, kids in classrooms were taught the color of their skin was their most important characteristic and if they looked a certain way, they were inferior. Today, kids again are being taught that the color of their skin defines them and if they look a certain way, they’re an oppressor,” Scott said. “From colleges to corporations to our culture, people are making money and gaining power by pretending we haven’t made any progress. By doubling down on the divisions we’ve worked so hard to heal. You know this stuff is wrong. Hear me clearly: America is not a racist country.”

“It’s backwards to fight discrimination with different discrimination. And it’s wrong to try to use our painful past to dishonestly shut down debates in the present,” he continued. “Original sin is never the end of the story. Not in our souls, and not for our nation. The real story is always redemption.” But the leftist media immediately pounced on the comments in an attempt to discredit the idea that America is not a racist country. Starting with NBC News:

And moving to ABC:

We all know why: