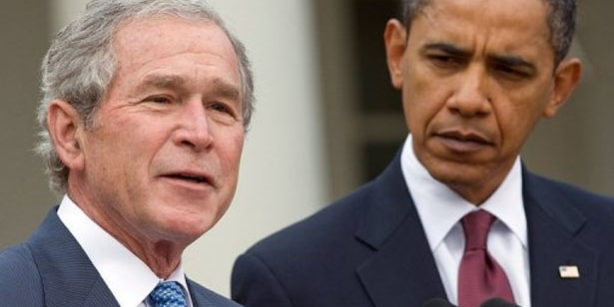 President George W. Bush was torn to shreds in 2005 by mainstream media commentators for his initial response to Hurricane Katrina – yet President Obama’s detached response to the recent Louisiana floods has been met with resounding silence from those same outlets.

“George Bush doesn’t care about black people” was the shocking charge by singer Kanye West about President Bush’s response to Katrina. West’s was a particularly blunt assessment, but echoed a growing narrative pushed by mainstream media outlets that Bush’s response was out of touch, inept and most of all, he didn’t care about people on the ground.

Much of the media coverage at the time not only criticized Bush for the difficulties the federal government faced in responding to the disaster, but also lambasted him for taking too long to return from vacation and to visit the site on the ground.

When he did return early from vacation, just two days after the disaster hit, he faced further criticism for flying over New Orleans on his way back to Washington D.C. before flying out to visit the victims of the tragedy.

Mainstream media condemned Bush’s alleged lack of compassion, immediately predicting it would destroy his entire legacy. A USA Today article written at the time summarized it this way:

“President Bush has shown that he can be empathetic, sensitive and decisive. But those qualities eluded him for days after Hurricane Katrina, and the lapse could become a defining moment of his White House tenure,” the analysis said.

The Washington Post would later go on to brand Bush’s response the second worst moment of his entire presidency.

Such concerns have been almost entirely absent from media coverage of the Louisiana floods in recent days. At least 13 people have died, while at least 85,000 have registered for disaster aid.

While nowhere near as devastating as the hurricane, the floods have wrought significant destruction on the area. Meanwhile, Obama’s response has been significantly more tepid than Bush’s.

Obama has still not returned from his vacation at Martha’s Vineyard, and the White House said Thursday Obama would spend the day golfing. While a White House spokeswoman said the president also spoke with FEMA Administrator Craig Fugate to get an update after Fugate’s visit to the area, there are currently no confirmed plans for Obama to end his vacation early.

A local paper has been one of the few voices to criticize  Obama’s response, reflecting growing annoyance at his response on the ground. In particular, it took aim at Obama’s decision to attend a Hillary Clinton fundraiser Monday.

“[I]f the president can interrupt his vacation for a swanky fundraiser for fellow Democrat Hillary Clinton, as he did on Monday, then surely he can make time to show up for a catastrophe that’s displaced thousands,” the editorial in The Advocate said.

“The optics of Obama golfing while Louisiana residents languished in flood waters was striking. It evoked the precedent of the passive federal response to the state’s agony in 2005, a chapter of history no one should ever repeat,” the paper wrote.

So far, there have been no mainstream media outlets criticizing Obama’s apparent lack of response, nor have there been any celebrities claiming Obama doesn’t care about the people on the ground.