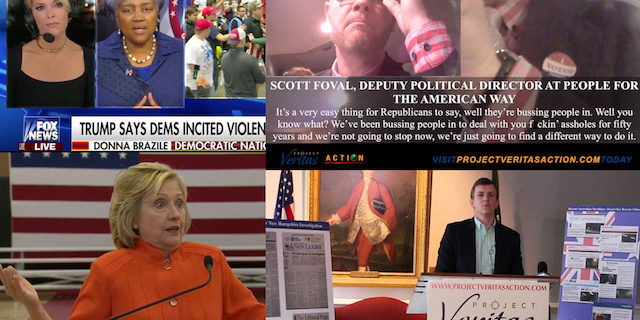 James O’Keefe’s Project Veritas released their third investigative video exposing the dark web of Democratic operatives and consultants who are seen allegedly colluding to instigate violence at Trump rallies, take part in voter fraud schemes, and provide a hub from where pro-Clinton super PACs can establish lines of communication. In this third video, taken from a yearlong investigation into the Clinton campaign’s inner workings, we have allegations that Hillary Clinton herself is involved with some of the activities at Trump rallies.

“In the end, it was candidate Hillary Clinton, the future president of the United States who wanted ducks on the ground, so, by God, we will get ducks on the ground, said top Democratic operative Bob Creamer. “Don’t repeat that to anybody,” he added. The operations called for activists to shadow Trump/Pence events dressed as Donald Duck, a swipe at the Republican nominee’s refusal to release his tax returns. O’Keefe alleges that the Clinton campaign, working with the DNC, and the non-profit Americans United for Change is an illegal coordinated campaign activity.

Project Veritas contacted lawyers on the subject who told them, “The ducks on the ground are likely public communications for purposes of the law. It’s political activity opposing Trump, paid for by Americans United For Change funds but controlled by Clinton and her campaign.”

Bob Creamer and Scott Foval were two of the main principals featured in the first two videos. Creamer’s firm, Democracy Partners, has deep ties to the Clinton campaign and the Obama White House. Between November 21, 2011 and June 24, 2016, Creamer visited the White House 342 times, 47 of which were directly with the president. Creamer has gone to jail for tax violations and bank fraud, which landed him a five-month jail sentence with eleven months house arrest in 2006. The site WeaselZippers asked, “what was this ‘black hat’ guy, convicted felon, doing on such great terms with the White House?” Mr. Foval, who is captured talking about hiring the mentally ill and the homeless to carry out his objectives at rallies, was let go from his national field director position at Americans United From Change after O’Keefe’s videos were released. Mr. Creamer also resigned from his role with the Clinton campaign and the Democratic National Committee as a result of Project Veritas’ investigation.