Trump Says If Biden or Harris Won’t Visit the Border to See Their Crisis, Then He Will 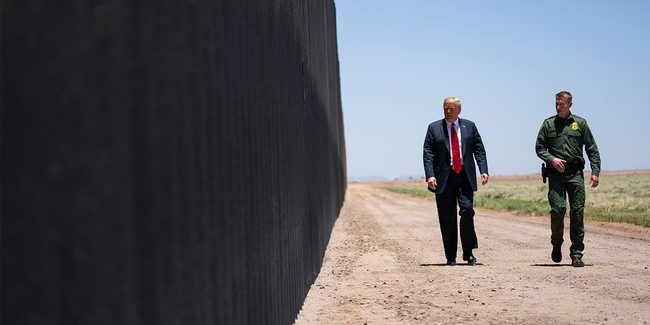 Former President Donald Trump announced on Tuesday he has officially accepted Gov. Greg Abbott’s (R) invitation to visit the southern border in Texas as the historic surge in illegal immigration and drug smuggling continues. Trump will be in Texas on June 30, which could mean he will visit the U.S.-Mexico border before Vice President Kamala Harris. Trump said he hopes his visit will bring renewed attention to the current border crisis, along with showing support for Border Patrol and U.S. Immigrations and Customs Enforcement.

“The Biden Administration inherited from me the strongest, safest, and most secure border in U.S history and in mere weeks they turned it into the single worst border crisis in U.S history. It’s an unmitigated disaster zone,” Trump said. “We went from detain-and-remove to catch-and-release. We went from having border security that was the envy of the world to a lawless border that is now pitied around the world. Biden and Harris have handed control of our border over to cartels, criminals, and coyotes. Drug dealers, MS-13 gang members, human smugglers, sex traffickers, and the criminal elements of the world now have free reign,” he continued.

“If this weren’t bad enough, Biden and Harris won’t even tour the scenes of the wreckage they created, or come down and visit with the Border Patrol and ICE heroes risking their lives to defend our Nation at a time when the White House is doing everything it can to make their job totally impossible,” he added. “What Biden and Harris have done, and are continuing to do on our border, is a grave and willful dereliction of duty.”

Abbott and Arizona Gov. Doug Ducey recently sent a letter to governors all across the country to send any available law enforcement resources to help them with the surge. Both Abbott and Ducey said the extra help is needed despite sending state troopers and the National Guard.