With Omar Refusing To Apologize For Anti-Semitic Remarks, House Dems Could Be Voting On Resolution Rebuking Her 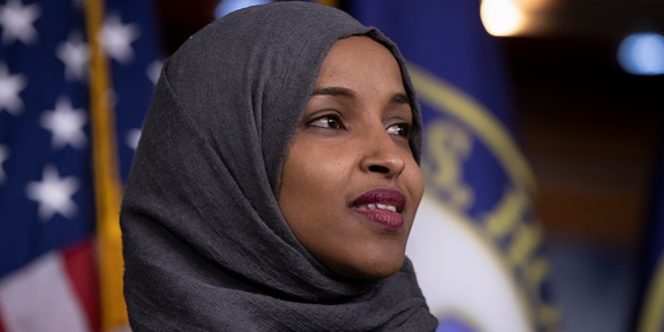 She’s not budging. No sir, she’s not going to apologize for her remarks that some have rightfully taken to be viciously anti-Semitic. Rep. Ilhan Omar (D-MN) once again got slapped with this accusation, which isn’t her first time, over her remarks where she accused pro-Israel lawmakers of having an allegiance to a foreign country. Yeah, we’re rehashing the dual loyalty smear, which for now, doesn’t look like she’s going to retract. It’s caused heartburn for House Democratic leaders, whose Jewish members are reportedly unnerved by Omar and her colleague Rep. Rashida Tlaib’s (D-MI) viciously anti-Israel stances. Tlaib and Rep. Alexandria Ocasio-Cortez (D-NY) are just two names that have come to her defense. That’s all you need to know, folks. Both Omar and Tlaib support the anti-Israel and accused anti-Semitic Boycotts, Disinvestment, and Sanctions movement. AOC is just nuts. Now, Democrats are saying they will be forced to drop a resolution condemning anti-Semitism. It could very well also be a resolution rebuking Omar for her bigoted views as well. This is said to be happening on Wednesday (via Politico):

Speaker Nancy Pelosi and top Democrats are confronting a new controversy involving freshman Rep. Ilhan Omar, who has defied her colleagues’ calls to apologize for recent comments viewed as anti-Semitic.

Public scrutiny over the Minnesota Democrat intensified over the weekend as two of the House’s most senior Democrats condemned Omar’s remarks accusing pro-Israel advocates of “allegiance to a foreign country.” And the problem threatens to get worse for Democratic leaders, with Omar refusing other lawmakers’ pleas to retract her statements.

House Appropriations Chairwoman Nita Lowey on Sunday called out Omar’s use of “offensive, painful stereotypes” — leading to an awkward Twitter clash as Omar dug in on her comments and was cheered by some on the left.

The chairman of that committee, Rep. Eliot Engel, who is Jewish, called out Omar for a “vile anti-Semitic slur” over the weekend, but did not call for her to be removed from the committee.

But Omar has received support from prominent progressive figures, including fellow freshman Rep. Rashida Tlaib (D-Minn.) — the first Palestinian-American congresswoman, who has also strongly argued that U.S. policy toward Israel should be overhauled. Another popular progressive, Rep. Alexandria Ocasio-Cortez (D-N.Y.), has also come to Omar’s defense.

In response to Lowey’s criticism, Tlaib defended Omar and said she had been “targeted just like many civil rights icons before us who spoke out about oppressive policies.”

Oh please, her remarks, and the one about AIPAC, and the one about how Israel has hypnotized the world, were all anti-Semitic trash. Martin Luther King, Jr. fought for a fierier America for peoples of all skin colors and equality. These anti-Israel clowns want death and destruction for those following the Jewish faith. These two struggles are not the same, especially since the latter is interwoven with the issue of international terrorism. MLK and Hamas. Yeah, there’s no equivalence. Condemn Omar. Remove her from her committee post because she’s already turned that into a clown show with her unhinged line of questioning against Special Envoy to Venezuela Elliott Abrams. Dare I say, House Democrats are actually doing a decent job policing their own…for now. This could all change in a few days. But for now, rebuke Omar and her bigoted views.

NPR added yesterday that Omar’s office didn’t respond for a comment about the impending resolution:

House Democrats are again considering a vote on a new resolution condemning anti-Semitism in response to recent comments by Rep. Ilhan Omar, D-Minn., that senior members of the party and Jewish groups say play on anti-Semitic tropes. A House Democratic leadership aide said the vote could come as early as Wednesday.

A spokesman for Omar has not responded to a request for comment on the resolution.

The infighting among Democrats has largely played out on social media, but this time the Minnesota Democrat is pushing back against her colleagues who say she should apologize and change her tone.

“I want to talk about the political influence in this country that says it is OK to push for allegiance to a foreign country,” Omar said at the event. The statement has sparked a furious response from senior Democrats and Jewish groups.